The committee is chaired by Tharaka MP Gitonga Murugara. 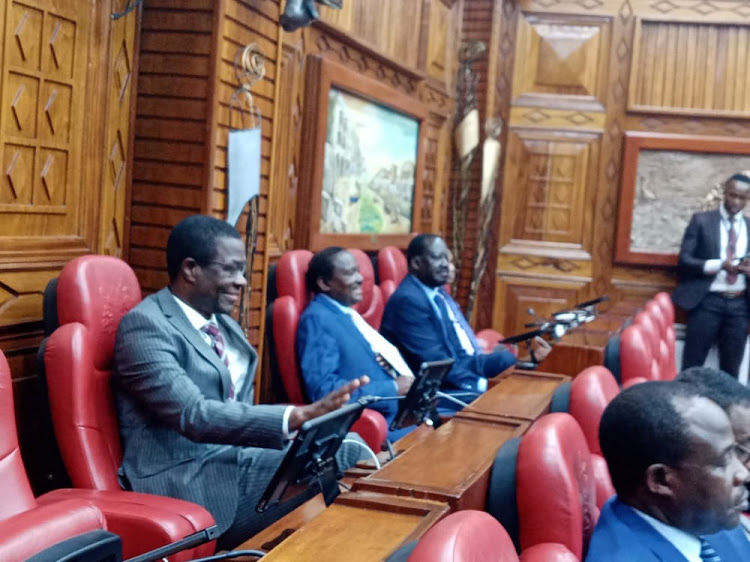 ODM leader Raila Odinga and Wiper's Kalonzo Musyoka are among the dignitaries at the hearing of the petition seeking the ouster of the IEBC Four.

The four, in what exposed the deep rift at the electoral agency, did not own the results that gave William Ruto victory in the face-off with Azimio’s Raila Odinga.

The Justice and Legal Affairs Committee chaired by Tharaka MP Gitonga Murugara is meeting the first petitioner - a representative of the Republican Liberty Party.

Party is represented by Kennedy Mongare accompanied by members of the party's national chairman Zachary Momanyi.

Advocates for the commissioners are Jotham Arua for Justus Nyangaya, Donald Kipkorir for Irene Masit, Danstan Omari and Apollo Mboya for Juliana Cherera, and Gichamba (confirm) for Francis Wanderi.

The National Assembly’s Justice and Legal Affairs Committee scheduled hearings with the four petitioners pushing for their removal starting Thursday.

The committee began with submissions from the petitioner on behalf of the Republican Liberty Party.

Petitioners Geoffrey Langat and Owuor Gerry are scheduled to make their submissions on Thursday.

Commissioners Cherera and Masit are lined up to face the committee on Monday, November 28, to respond to the petitions.

Wanderi and Nyang'aya will respond to the allegations touching on them on Tuesday, November 29.

Cherera's attempt to stop proceedings on her removal flops

Cherera and three other commissioners have been summoned to appear before the committee.
News
2 weeks ago

He said the constitutional threshold for removal is so high.
News
2 weeks ago
Post a comment
WATCH: The latest videos from the Star
by MOSES ODHIAMBO Journalist and Political Writer
News
24 November 2022 - 10:43
Read The E-Paper