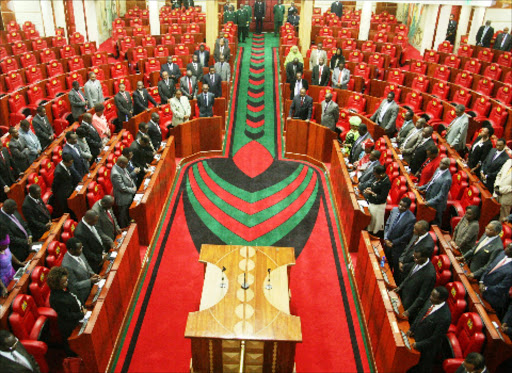 Members of parliament during a session.
Image: File

Members of Parliament will wait longer for the outlawed constituency development fund to be operational.

The National Assembly resolved to set up a joint committee with the Senate to lead the Constitutional amendment process.

The 20-member team is tasked with collecting views from members in an exercise that will culminate in the fund including that of the Senate oversight among others entrenched in the Constitution.

It is to report back to the House after 90 days.

"Report to the Houses of Parliament within 90 days to enable the speakers to make a decision and give direction on whether or not the legislative proposal is to be published into a Bill or not to be proceeded with," read a statement tabled.

Both Houses will now produce an equal number of 10 members.

The MPs named five members from each of the majority and the minority sides.

Two other members-Stephen Mule and Robert Githinji-who are the architects of the Bill, have been co-opted into the Ad hoc committee.

While moving the motion, Majority leader Kimani Ichung'wah said CDF has had a positive impact in their constituencies.

"This particular fund has turned around the lives of our people,"  Ichung'wah said.

The Supreme Court in August ruled the CDF Act, 2013 unconstitutional as it violates the principle of separation of powers.

Ainabkoi MP Samuel Chepkonga has been appointed as a co-chairperson from the assembly.

In a list which had earlier been tabled, the committee was to have 18 members combined-nine from each House before it was amended.

If it sails, the MPs will get up to Sh80 billion of the fund which is a five per cent increment from the current 2.5 per cent.

The mandate of the committee is to facilitate the collation of the views from the comments by MPs during the general debate on the proposal and invite members with similar or related proposals to make submissions before the Committee.

It will also invite, engage with and consider submissions from stakeholders and relevant constitutional and statutory bodies with a law reform mandate, including the Attorney General and the commissions and independent offices.

“In consultation with the sponsors, attempt to develop and recommend a harmonised version of the proposal arising from the submissions received,” the motion reads.

I fear going to my Kikuyu office over CDF — Ichung'wah

He said about 105 constituents camp at his office looking for bursaries.
News
2 months ago

MPs want the fund allocated at least five per cent of national revenue.
News
2 months ago
Post a comment
WATCH: The latest videos from the Star
by FELIX KIPKEMOI Political Reporter
News
24 November 2022 - 09:09
Read The E-Paper