Most of Kyiv spends night without power after missiles 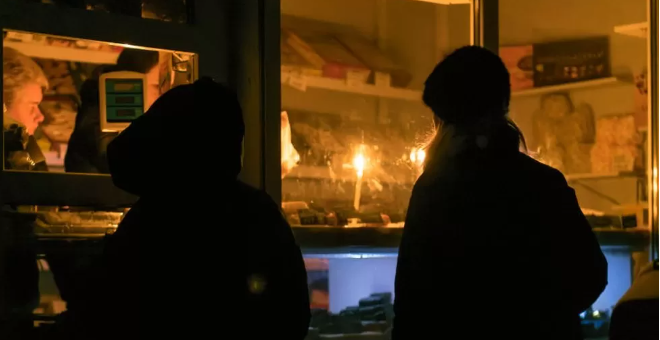 Stores operated by candlelight in a town near Kyiv after strikes hit energy infrastructure
Image: BBC

Around 70% of the Ukrainian capital woke up without power on Thursday morning, as work continued to restore the city's water supply.

Kyiv Mayor Vitali Klitschko told BBC Ukrainian he was not ruling out a "worst scenario" where the city would be without electricity, heat and water.

President Volodymyr Zelensky's office later reported that "electricity is supplied to all regions" of Ukraine.

"As of now, the connection to the network of household consumers is gradually proceeding," he added.

Across Ukraine, winter is setting in, with snow and sub-zero temperatures.

This morning, a thick wet mist hung over Kyiv. You could make out the shapes of nearby buildings, but barely. The only lights seemed to be the headlamps of cars.

Many people now see their workplace as a refuge from the cold, because at least the heating is always on - unlike at home.

But many in Kyiv seem matter-of-fact about the hardships they are facing, finding ways to work around it. More and more people are installing generators as a means of having back-up power.

And running water is also no longer a guarantee - even before yesterday's latest missile attack.

He said Russian occupiers would never understand this, "existing for a long time in an impenetrable darkness themselves".

In the western city of Lviv, power, water and heat have been restored, after it was left entirely without electricity, according to its mayor Andriy Sadovyi.

But he said there would still be planned blackouts in parts of the city.

Russia has been targeting missiles at Ukraine's energy network for weeks, with rolling power cuts becoming part of everyday life for millions of Ukrainians.

In the capital, there has been huge disruption to mobile communication, with many unable to even make voice calls.

Residents of high-rise blocks cannot cook food without electricity - and ordering online is a challenge too, given unstable internet access.

Even though the city's water supply is being restored, thousands are still without drinking water. And supermarkets are struggling to accept card transactions.

The problems follow 70 missile strikes across Ukraine on Wednesday, according to Mr Zelensky.

Officials say they will be up and running again by Thursday evening - which should help to ease supply issues.

More than half of neighbouring Moldova also had its electricity cut, but power was restored in much of the capital Chisinau within a few hours.

The country's foreign ministry has reportedly summoned the Russian ambassador - and in a statement decried the "dramatic consequences" for Moldova of Russia's "brutal bombing of Ukraine".

In an address to the UN Security Council, Volodymyr Zelensky accused Moscow of "an obvious crime against humanity".

Millions had been left in the cold without heating, water or energy due to Moscow's "formula of terror", he said.

The World Health Organization has warned the country faces a humanitarian catastrophe, as hospitals are left without energy.

After Wednesday's strikes, a hospital in central Ukraine had to switch to generators as doctors carried out two kidney transplants.

In a statement, Russia said it had used "high-precision" weapons in a mass strike to target energy sites linked to Ukraine's military, as well as other military infrastructure.

It said it achieved its goal: disrupting the transport of Ukrainian reservists, foreign weaponry and ammunition to conflict zones.

The Russian defence ministry also claimed "not a single strike" was carried out in Kyiv - suggesting all damage in residential areas was a result of Ukrainian and foreign anti-aircraft missiles.

Blackouts across Ukraine amid wave of Russian strikes

Officials in Kyiv which was among the targets said three people died in the attack.
News
2 weeks ago

Governor of Mykolaiv region warned of "many rockets" arriving from the south and east.
News
2 weeks ago

Russia has recently increased its attacks on Ukrainian energy networks.
News
2 weeks ago

Stores operated by candlelight in a town near Kyiv after strikes hit energy infrastructure
Image: BBC
Post a comment
WATCH: The latest videos from the Star
by BBC NEWS None
News
24 November 2022 - 17:54
Read The E-Paper