• In October, the government of Kenya opened the gates for the importation and use of Genetically Modified Crops, popularly known as GMOs.

• According to the CS, the imports will be shipped by the private sector. 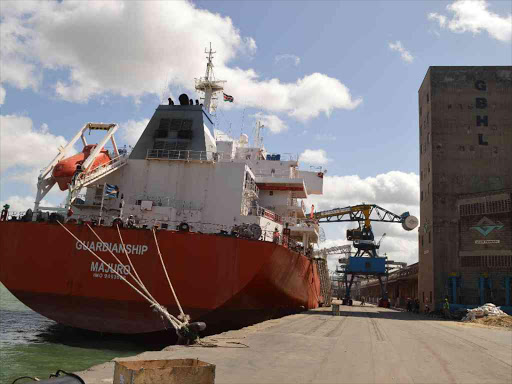 A ship carrying maize docks at the Port of Mombasa
Image: FILE

Kenya will receive several tonnes of maize, just days after the government said it will open a window for duty-free GMO maize to enter the country.

The move is aimed at addressing the biting food crisis as millions of citizens face starvation.

According to a statement from the Kenya Ports Authority (KPA) released on Monday, some 37 vessels are expected at the port of Mombasa.

Number four on the list, the Africa Merlin Ship, carrying bulk maize and empty bags is said to have arrived on Monday.

Last Thursday, Trade Cabinet secretary Moses Kuria announced the government had made the tough call to allow duty-free importation of 10 million bags of GMO maize over the next six months.

“Tomorrow (Friday)  I’m signing a gazette notice to allow for the importation of GMO maize duty-free, until we achieve food security because that is our cardinal responsibility as government,” he said.

Kuria said he will issue a gazette notice to authorise the importation and added that the government is ready to shoulder the potential backlash that could follow the decision.

This, he said, will then open up the market to millers and anyone who wishes to import the maize duty free for six months.

“There is no harm in adding GMO to the list of the very many things that can kill you in this country. That is why we have deliberately decided to allow GMOs into this country until we are satisfied that we have enough maize, the staple food,” Kuria said.

According to the CS, the imports will be shipped by the private sector.

The gazette notice is however not yet out.

In October, the government of Kenya opened the gates for the importation and use of Genetically Modified Crops, popularly known as GMOs.

A statement by President William Ruto said the move was after considering many factors, including various expert and technical reports on the adoption of biotechnology.

“Cabinet vacated its earlier decision of November 8, 2012 prohibiting the open cultivation of genetically modified crops and the importation of food crops and animal feeds produced through biotechnology innovations; effectively lifting the ban on Genetically Modified Crops.

"By dint of the executive action open cultivation and importation of White (GMO) maize is now authorised,” the statement read.

The government said this would be a quick way to deal with the ravaging drought in some parts of the country, which has affected at least 23 counties.

The MP said the planned importation will be detrimental to the maize farmers.
News
2 months ago
Post a comment
WATCH: The latest videos from the Star
by MAUREEN KINYANJUI News Reporter
News
22 November 2022 - 12:04
Read The E-Paper