The government lifted the 10-year ban on GMOs in October.

• A statement by Ruto said the move was after considering many factors, including various expert and technical reports on the adoption of biotechnology.

• Over a decade ago, when he served as the Minister of Agriculture under Raila Odinga then Prime Minister, Ruto opposed the use of the genetically modified foods. 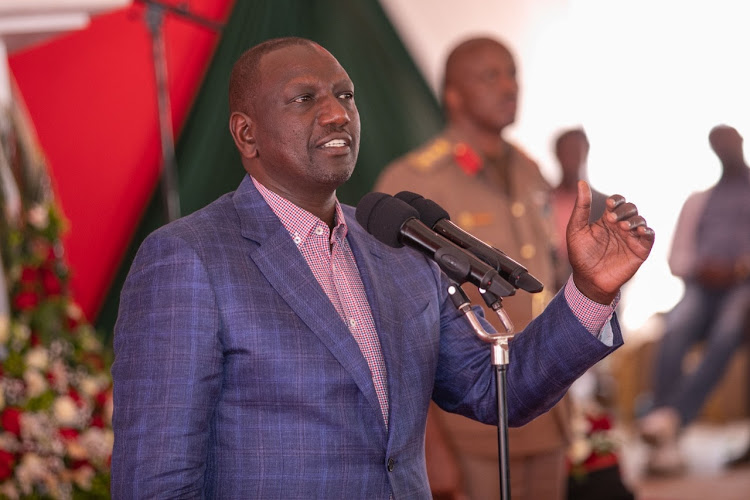 President William Ruto in a past event.
Image: PCS

President William Ruto's current take on the Genetically Modified Organisms (GMOs) is a change from his previous stance, the Star has established.

In October, the government lifted a 10-year ban on GMOs, allowing their  importation and use.

A statement by Ruto said the move was after considering many factors, including various expert and technical reports on the adoption of biotechnology.

Over a decade ago, when he served as the Minister of Agriculture, Ruto opposed the use of the genetically modified foods.

"Until we have agreed as a country that we can have GMO, we will not have GMO. Until we develop our own local varieties , using our local expertise," Ruto said 11 years ago.

The ban on GMO imports was enforced in 2012 following a presidential decree by the late President Mwai Kibaki after recommendations by the then Minister for Public Health Beth Mugo.

Mugo had cited a study by a French University that linked cancer in rats to the consumption of genetically modified foods.

Since Ruto's cabinet lifted the ban, several political leaders, clergy and Kenyans at large have spoken on the matter.

The debate has seen the opposing voices reiterating Mugo's remarks on health risk and the discussion on the the impact of the importation on local farmers.

“I Didmus Wekesa Barasa Mutua, the son of a widow, do not support importation of GMO-related foodstuffs. Will only do, at a time when, we would have equipped our hospitals with proper disease diagnostics,” Kimilili MP Didmus Barasa said.

Others have said that GMO foods are not a solution to the ongoing drought.

"A time has come when we need to embrace the use of GMOs, we have no option. The seasonal rains are now unpredictable and no longer consistent as they used to be," Kirinyaga Woman Representative Njeri Maina said on Sunday.

Raila: Why I changed my stand on GMOs

Raila 10 years ago defended GMOs but he is now against it.
News
2 months ago

Maina says time is ripe for Kenya to tap into GMO foods to combat starvation
Counties
2 months ago
Post a comment
WATCH: The latest videos from the Star
by SHARON MWENDE
News
22 November 2022 - 20:38
Read The E-Paper