• He further said that the prosecutor on records had indicated that a decision to charge has not been made.

• However, this was quickly shut down by Ipoa who insisted that the DPP has already made a decision to charge and even forwarded a letter agreeing with their finding. 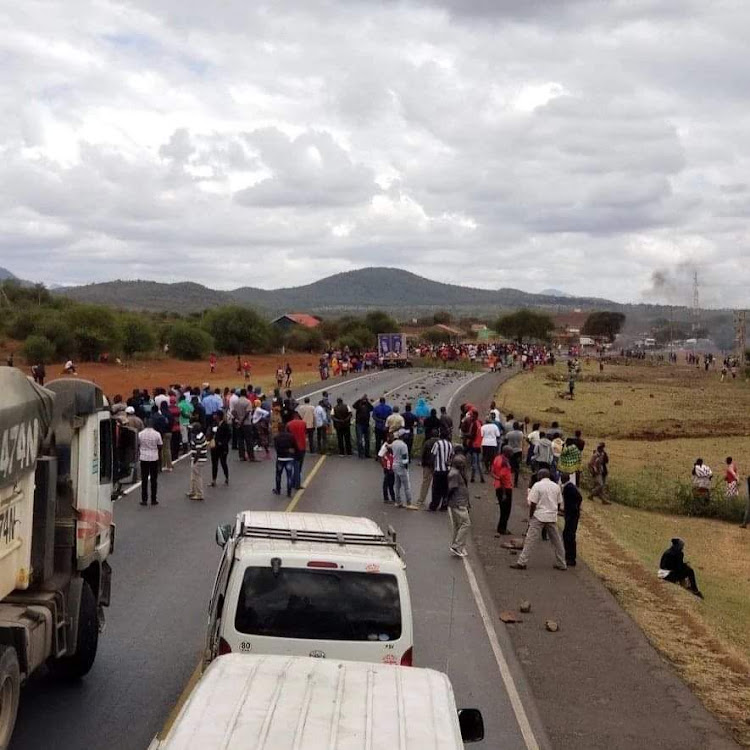 KILLED: Demonstrators in Masimba along the Nairobi-Mombasa highway before GSU officers arrived and allegedly opened fire on them killing four and injuring seven.
Image: KURGAT MARINDANY

There was confusion before a Nairobi court on Monday on whether the DPP had approved charges against the Masimba GSU cops.

This is after their lawyer Danstan Omari told court that the prosecutor in the case had indicated that there was no decision to charge.

However, Ipoa said the DPP had given a go ahead for the nine cops to be charged with murder.

Omari told Justice Antony Ndung’u that he had talked to the state and they were of the view that they needed more time to respond to the petition challenging the prosecution of the cops.

He further said that the prosecutor on records had indicated that a decision to charge has not been made.

“This was new to us, our clients were apprehensive that there was a decision to charge,” he said.

At one point Omari made an application to withdraw the petition since there was no decision to charge as he had been made to believe.

“If the state and Ipoa confirm that the DPP has not approved charges then this application before you becomes academic, then there is no need to argue because no one can stop the state from continuing to investigate,” Omari said.

However, this was quickly shut down by Ipoa who insisted that the DPP has already made a decision to charge and he has even forwarded a letter to the Ipoa office agreeing with their finding that the officers should be prosecuted.

Ipoa said the DPP is the one who directed that the officers be charged and there is even a letter showing the DPP directing the IG to arrest the officers for purposes of processing.

“So, I don’t know perhaps the prosecutor may not be in full knowledge of what’s happening because the letters are from the DPPs office,” the court heard.

The prosecutor on record told court that the decision to charge had not been made yet because the charge sheet has not been filed in court.

“As far as I am concerned the decision to charge is done when a matter has been filed in court as it is now, we have not done that yet,” he said.

But, Justice Ndung’u said the DPP was playing with semantics because a decision to charge is at the DPP’s desk not filing in court.

“I don’t know in what context you are saying a decision to charge is when you have charged. I am not sure that is correct,” the judge said.

Omari asked court for conservatory orders arguing that there are two contradictory statements from Ipoa and ODPP on whether there is a decision to charge.

“Can the state then issue an undertaking that they will not arrest my clients and bring them to court tomorrow,” he said.

Justice Ndung’u said he is not in a position to direct the state not to arrest the cops because there are no conservatory orders until the matter is heard inter-parties.

The case will be mentioned on December 8 to confirm compliance.

In the case, nine GSU officers who are expected to face murder charges for the Masimba shooting in June want the court to stop their prosecution.

The nine are expected to be charged with the murder of four people.
News
2 months ago

The incident happened when the officers opened fire at the demonstrators on the Nairobi – Mombasa Highway.
News
2 months ago

They are accused of shooting and killing four on June 2 during a protest over increased attacks by wild animals.
News
2 months ago
Post a comment
WATCH: The latest videos from the Star
by ANNETTE WAMBULWA Court Reporter
News
21 November 2022 - 14:46
Read The E-Paper