Three people have been reported dead so far.

•The accident occurred at Joska's black spot in Taita and it involved a Memon Academy School bus.

•The bus was reportedly carrying teachers from a burial function. 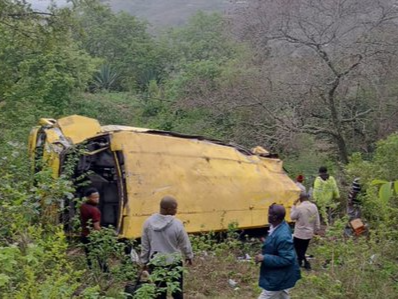 Wreckage of a school bus that was involved in an accident. IMAGE: SIKIKA ROAD SAFETY

Several people are feared dead after a school bus carrying a group of people crashed in Taita Taveta County on Saturday evening.

The accident occurred at Joska's black spot in Taita and it involved a Memon Academy School bus.

The bus was reportedly carrying teachers from a burial function.

By the time of going to the press, at least three people were confirmed dead.

"There is a bad crash at Taita on Josa black spot involving Memon school bus (was carrying adults)... People have lost their lives(bodies lying on the ground), and rescue is ongoing," Sikika Road Safety reported.

The exact number of people who were being transported by the bus is yet to be known.

Reports indicate that the injured victims were rushed to the nearby hospital for emergency care.

Images of the bus involved in the accident indicate that it could have rolled several times.

EALA MP-elect Suleiman Shabal is among a section of Kenyans who sent out condolences to the families of those who perished and wished a quick recovery to the injured.

"I'm saddened by the reports of an accident involving the Memon Academy bus carrying teachers travelling to attend a funeral. The accident in Taita Taveta County is reported to have led to the loss of some of the teachers on the bus," Shabal stated.

"My prayers and that of my wife Rahma go out to the family of the deceased, the injured, and the school management. May Allah rest the departed souls in eternal peace."