• Wachira said the same way President Ruto gazetted a task force to look into the implementation of the CBC, he should also gazette a team to look into health issues.

• Chebii said most of the cases have been linked to mental illnesses, mostly attributed to work-related stress, alcoholism and drug abuse. 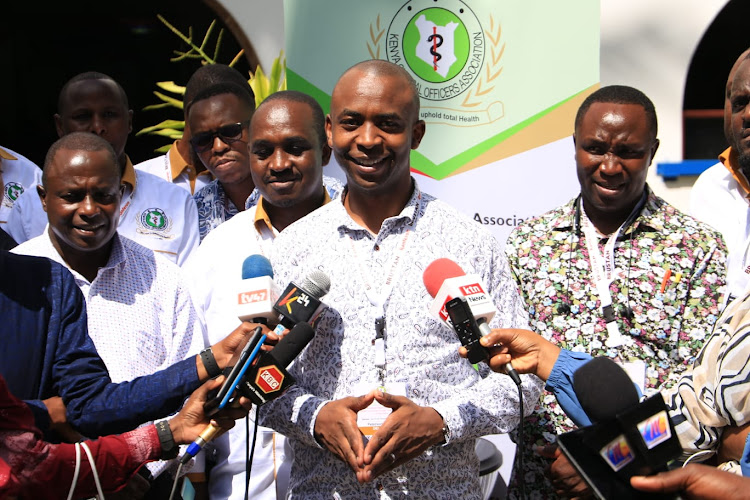 At least four clinical officers have died by suicide in the last three months due to mental health-related stress, a union has said.

He said there are deep-rooted problems that have persisted in the health sector since the onset of devolution in 2013.

“We are requesting President William Ruto to intervene,” Wachira said.

In March, the union resolved that the national government should form a task force to look into the challenges facing the health sector in the country.

Wachira said the same way President Ruto gazetted a task force to look into the implementation of the CBC, he should also gazette a team to look into health issues.

“We are requesting him to gazette a national task force on health to look at the challenges affecting medics so it can recommend solutions,” he said.

In the last 10 years of devolution, Wachira said, there have been 113 strikes, but health workers grievances are yet to be resolved.

“Kenya's health sector does not have a framework. We do not have guidelines on how many health workers should be employed annually and we cannot seek transfer to other counties. We are trying to ensure that we have good policies in place to fill those gaps,” he said.

KUCO secretary general Joseph Chebii said they are concerned with the number of colleagues who have died by suicide.

He said most of the cases have been linked to mental illnesses, mostly attributed to work-related stress, alcoholism and drug abuse.

“We purely want professional development and the welfare of the clinical officers. We are calling upon the government and other stakeholders in the industry to intervene on the issue of mental health among clinical officers,” Chebii said.

The KUCO secretary general said most clinical officers are complaining of poor remuneration and long working hours that lead to burnout.

“This challenge needs a broad approach. Cases of mental health are not only affecting clinical officers but nurses and other cadres of healthcare workers. We are losing very productive members of the country, therefore, we need to handle this issue carefully,” he said.

They were speaking during the 24th KUCO annual conference at a Mombasa hotel.

Taiti, who is also the Laikipia county health executive, said most counties have not been meeting the 15 per cent of the budgetary allocation into health.

“I think this is one of the things every one of us should emphasise on, that enough resources should be channelled to health so that we can sort out all these myriad of problems that we have,” he said.

Taiti said that, as a union, they want to push harder for more resources to come from the national government through the ministry to the counties because health is a devolved function.

“We need to think about the general welfare of health workers because they are the software of any system and if the software is not working, even if you have the best and most admirable gadget, with poor software it can never work,” he said.

Official George Githure urged the current administration to take action on the promises they made to clinical officers and Kenyans in the manifesto, which included employing 20,000 health workers.

Githure said they are pushing for the government to establish a Health Service Commission that will work with county governments to strengthen the health system.

“We want to assure them that by virtue of establishing a Health Service Commission, we are not killing counties because we have had strikes which emanated due to delays of salary payment, lack of promotion and even some being denied the opportunity to go for higher training. We want to have a central body that will help in addressing our issues."

Orders that experts be sought for effective delivery of service.
News
2 months ago
Post a comment
WATCH: The latest videos from the Star
by AURA RUTH
News
17 November 2022 - 23:00
Read The E-Paper