Ruto, during the COP27 summit rallied for support in dealing with the effects of climate change.

• Apart from the human beings faced with starvation, wild animals have also been affected with thousands reported dead.

• In his address at the COP27 summit, Ruto rallied for support in dealing with the effects of climate change. 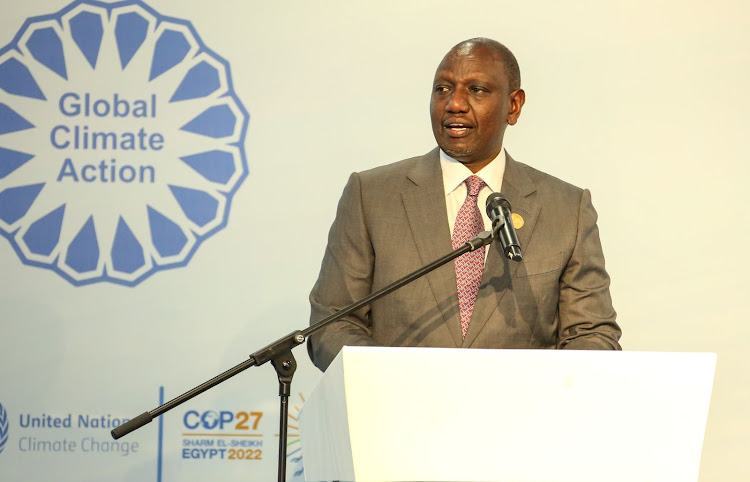 President William Ruto has said that for the first time in Kenya's history the country must feed wildlife due to the ravaging effects of drought.

The President said that the country is facing the worst drought in 40 years due to failed rainfall in 3 to 4 consecutive years.

Speaking at CNN in Egypt on Tuesday, Ruto added that the country has to provide relief food for 4.3 million Kenyans affected by drought.

"We have to allocate funds meant for hospitals, drugs and education to feed the population," he said.

"For the first time in the history of our nation, we have had to feed wildlife and it is something that we have never seen, the reality of climate change is here with us."

Ruto said that the effects of drought in Kenya are a huge source of concern.

In his address at the COP27 summit, Ruto rallied for support in dealing with the effects of climate change.

Apart from the human beings who are faced with starvation, wild animals have also been affected with thousands reported to have died.

The Wildlife Research Training Institute (WRTI), in a study titled The Impacts of the Current Drought on Wildlife in Kenya (2022) notes that in the last two seasons of October 2021-May 2022, the country has received rainfall below average, more than 1,000 deaths have been recorded.

The most affected species are the wildebeests, common zebras, elephants, Grevy’s zebras and buffalos.

Amboseli, Tsavo and Laikipia-Samburu ecosystems are listed as the most hard hit.

KENDO: No promises beyond COP27

The consequences of decades of inaction – of promises upon promises – are self-evident across the polity.
Opinion
2 months ago

President will also be outlining Kenya’s policies and strategies to tap into the global carbon market
News
2 months ago
Post a comment
WATCH: The latest videos from the Star
by PERPETUA ETYANG
News
09 November 2022 - 13:26
Read The E-Paper