Why Kenya got a raw deal in SGR agreement with China

All materials for the construction of the SGR were to be sourced from China and exempted from tax.

•Contrary to reports that the port of Mombasa had been offered as collateral, the agreement does not indicate.

•In the agreement, China also has exclusive rights to assign or transfer all or part of the rights and its obligations to a third party without notice in case of a default. 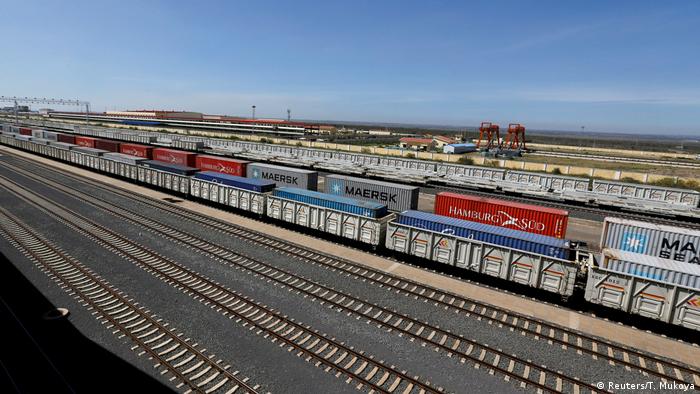 The SGR hauls hundreds of containers like these seen here at the Nairobi SGR Terminus, every day.
Image: Reuters

In the documents released by Roads and Transport cabinet secretary Kipchumba Murkomen on Sunday, Kenya seemingly got the short end of the stick in its Standard Gauge Railway line deal with China.

After the lapse of a seven-year grace period given by the Export-Import Bank of China to Kenya since the signing of the contract in 2014, the government started servicing the facility in 2020.

According to the agreement, the Kenyan government has 17 more years to repay the Chinese loan offered for the construction of the standard gauge railway (SGR).

It has also emerged that the government was granted (US$1.6 billion) Sh179billion, an amount to be repaid at a rate of 2.0 per cent yearly.

It had been reported that the contract cost the taxpayers’ a whooping Sh450billion to construct a 578kilometer railway.

Similarly, contrary to reports that the port of Mombasa had been offered as collateral, the agreement does not, however, indicate.

Instead, the lender states that should the government default on the repayment of the loan the railway development fund (RDF) could be used as a priority to repay all loans.

“The borrower undertakes to procure that the government of Kenya or the relevant authorities shall stipulate and issue preferential policies, regulations or approvals in relation to the RDF which could be applied in priority to make repayment of loans in relation to the project,” the agreements state.

Under the agreement entered, China also has exclusive rights to assign or transfer all or part of the rights or its obligations to a third party without notice in case of a default.

“The borrower shall sign all such documents and do necessary acts and things as the lender may reasonably require for the purpose of perfecting and completing any such assignment and transfer provided any costs incurred are borne by China,” the contract states.

Repayment of the management and commitment fees is repaid is at 0.25 per cent.

Before the fund was released by the Chinese bank, Kenya was to pay the ($US4million) as a management fee in one lump within 30 days after the signing of the agreement.

“The entire principal amount shall be repaid by 26 equal instalments on each repayment date of the principal and interest amount” read the agreement in part.

The initial preferential loan facility offered for the project was Sh179 billion ($US1.60billion).

The scope of works included the construction of the line section, supply and installation of the facilities, locomotives and rolling stocks.

In what has shade light on the deal that has seen the government incur huge public debts, details have also been revealed of why the government kept the contract a top secret.

In the contract signed by then-Treasury CS Henry Rotich and President of the Bank of China Ling Ruogu, the government was barred from making public the contents of the agreement.

The terms and conditions also required that the state create an escrow account with Sh25 billion at all times to restore confidence in the lender that the borrower would still be able to dispense loan repayments on time.

In the agreement, the Chinese Bank financed 85 per cent of the project while Kenya offered 15 per cent.

Kenya through the Kenya railways corporation was, however, to contribute an amount not less than 10 per cent of the commercial contract to China road and bridge construction as counterpart funding.

Kenya was also under an obligation to purchase all the raw materials for use in the project directly from China with duties being exempted.

“Goods, technologies and services are to be purchased directly from China preferentially,” the contract reads.

For the Nairobi-Naivasha project which was done under Phase 2A of the SGR project, the documents show that the Chinese Bank loaned Kenya ($US1.48billion) Sh143.82 billion.

The money is to be repaid 20 years from the date the agreement was inked with the interest repayment period set as January 21 and July 21 of each financial calendar and final repayment date.

A grace period of 60 months was given.

Kenya was to raise 15 per cent of the contract amount which is not less than ($US222.4million) Sh21.57 billion to CRBC as a self-raised fund before the loan was disbursed.

It was further under obligation to pay ($US137million) Sh13.34 billion as insurance premium, a management fee of ($US6milliom) Sh677 million which is 0.5 per cent of the loan facility and a commitment of 0.5 per cent yearly.

In the event of a default, the State is required to pay the principal and interest overdue at the rate of one per cent per year.

The agreement states, “Such interest shall accrue daily and calculated on the basis of the actual number of days elapsed and a 360-day year and payable on time to time as demanded.”

The Chinese also demand that the amount is to be repaid in full without any set-off, counterclaim, retention and without withholding taxes.

Post a comment
WATCH: The latest videos from the Star
by FELIX KIPKEMOI Political Reporter
News
07 November 2022 - 13:16
Read The E-Paper