Coping with and fighting stigma around cerebral palsy

CP is caused by abnormal development of the brain or damage to the developing brain, affecting a child’s ability to control muscles. 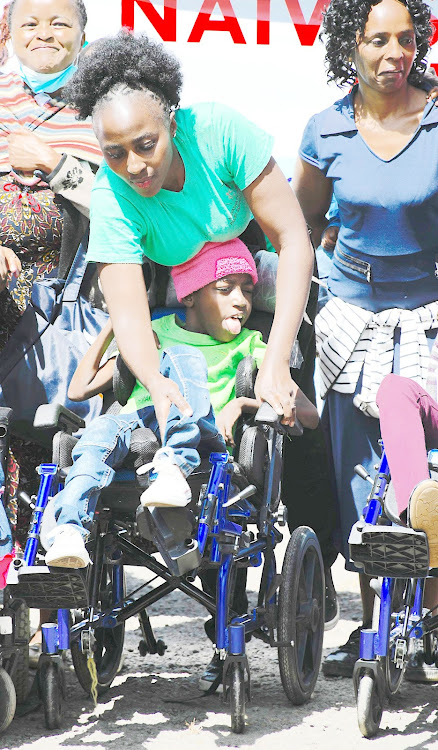 Lucy Wangari (in a green T-shirt) and her son Brandon Maingi (on wheelchair) with other support group members at the Disability Resource and Information Centre at Naivasha Subcounty Hospital.
Image: KNA

Symptoms of cerebral palsy include random, uncontrolled movements; weak arms or legs; delays in reaching development milestones; seeming too stiff or too floppy; seizures or fits and learning disability.

Cerebral palsy is the most common motor disability in childhood, according to America's Centers for Disease Control and Prevention.

Cerebral has to do with the brain, while palsy refers to issues affecting the muscles.

According to the World Health Organization, CP is caused by abnormal development of the brain or damage to the developing brain which affects a child’s ability to control his or her muscles.

WHO says there are several possible causes of the abnormal development or damage to the developing brain.

Medics say the abnormal development of the brain or damage that leads to CP can happen before birth, during birth, within a month after birth, or during the first years of a child’s life, while the brain is still developing.

This impairment of mobility also causes impaired and involuntary movement that can affect the ability to swallow, speak and control eye movements.

It can sometimes be accompanied by intellectual disability, blindness or deafness.

Symptoms of cerebral palsy include random, uncontrolled movements; weak arms or legs; delays in reaching development milestones; seeming too stiff or too floppy; seizures or fits and learning disability.

The physiotherapist says the earliest sign of cerebral palsy is when a baby fails to cry immediately after birth. This, he says is generally as a result of brain damage, which leads to cerebral palsy.

Kairu advises mothers to take their newborns for checkup immediately after birth to help in early diagnosis of the condition.

In case a baby is found to be suffering from CP at an early stage, their chances of quick recovery through physiotherapy are high, he says.

Cerebral palsy is a lifelong disability and there is no known cure. It requires continuous treatment to control the symptoms, such as convulsions, and ensure those affected lead a comfortable life.

Although there is no clear data in Kenya on the prevalence of CP, it is estimated that three in 100 children are living with cerebral palsy.

A 2016 study by the Orion Foundation, a nonprofit organisation supporting people with special needs, indicates that 91 per cent of caregivers for people living with the condition in Kenya are mothers.

Most have to quit their jobs to provide that care.

Data from WHO shows that globally, cerebral palsy affects around 18 million people of all ages or four out of every 1,000 live births.

At Site and Services estate in Naivasha town, KNA meets the family of Brandon Maingi who has lived with CP for 11 years now.

His mother Lucy Wangari says the burden that comes with raising a special child is not easy.

She explains that upon birth, her son was diagnosed with severe jaundice, a condition in which the skin, whites of the eyes and mucous membranes turn yellow because of a high level of bilirubin.

Wangari says she was devastated, having had no prior experience of dealing with such a case and so was the family.

She adds that the main challenge comes from the stigma around the condition.

Wangari says stigmatisation has forced many parents with children living with the disorder to hide them, denying them basic needs and access to critical physiotherapy services.

Wangari says the burden of care is often left to the mothers, especially in cases where a husband abandon the family as a result of the stigma.

She further says that the cost of treatment is hight, especially that of drugs such as anti-convulsions, whicht help suppress the symptoms of the condition.

Another major challenge is the cost and access to mobility aid devices such as wheelchairs, a basic need for cerebral palsy patients.

The lack of enough special schools/facilities in Naivasha to accommodate children with special needs is something that parents like Wangari have to grapple with.

She urges the government and well-wishers to come on board and invest more in these devices to accord them much-needed support.

On October 6 every year, Kenya and the world commemorate Cerebral Palsy Day in a bid to create awareness around the condition.

The condition does not just affect those living with it but their families and caregivers as well.

Cerebral palsy is a lifelong disability and there is no known cure. It requires continuous treatment to control the symptoms, such as convulsions, and ensure those affected lead a comfortable life.

However, the cost of medication is too high and out of reach for many families.

Maingi’s mother is grateful to the Naivasha Cerebral Palsy Support Group, which provides mental health and psychosocial support to caregivers to protect and promote their mental and psychosocial well-being.

Kairu called on the county government to intervene and subsidise the cost of the drugs.

He also urged communities to embrace and support people living with cerebral palsy.

Currently, there are very few schools that cater for the needs of deaf children.
News
1 month ago

Machakos nun takes in discarded people no one wants