He urged the members of the 13th Parlaiment to be vigilant when passing laws.

• He urged the House Speaker Moses Wetangula and the MPs to revisit the laws and remake them "in the spirit of the Constitution".

• The nominee further urged the legislators to protect the Constituency Development Fund (CDF), pointing out that the program has changed lives 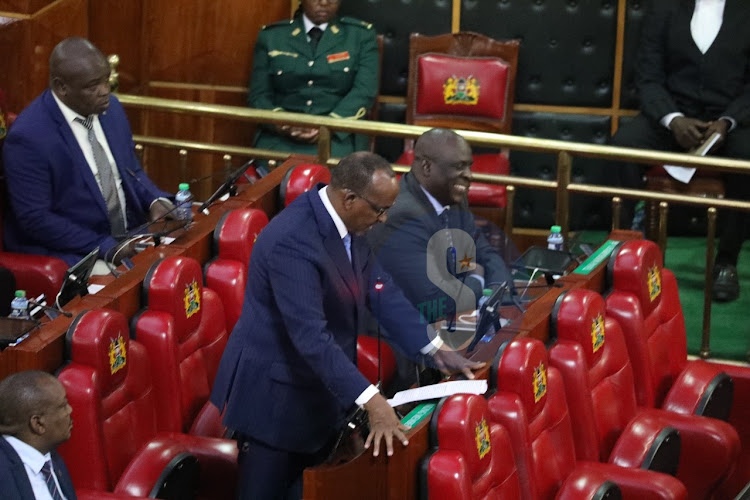 Garissa Town MP Aden Duale on Wednesday made an emotional farewell address to the House as he bid bye to the 13th Parliament.

Duale told the House he will shortly hand over his resignation as he crosses over to take the cabinet position in President William Ruto’s government.

"Mr Speaker, on my way I will hand over my resignation letter so that you can send it to IEBC,” he said.

He urged the members of the Parliament to be vigilant when passing laws.

Duale confessed that during the two terms he served, he made mistakes in passing laws that were not good for the country's independent institutions.

"I naively did that at some point, but I have since learnt how costly it is to the people of this country and even to parliament."

He urged the House Speaker Moses Wetangula and the MPs to revisit the laws and remake them "in the spirit of the Constitution".

The nominee further urged the legislators to protect the Constituency Development Fund (CDF), pointing out that the program has changed lives.

"It has built schools, hospitals, roads, police stations, and provided water and bursaries to our school-going children. We know how transformative it is. It's unique to us and the only legislature in the whole of the commonwealth to have it in place," he said.

Duale said the beauty of the Kenyan Constitutional democracy lied in the ability to constantly negotiate to find solutions.

He added that CDF has proven to be one of the solutions needed.

"Let's do all we can to find a way to keep the CDF model alive. In this way we will do a lot of justice to our people," he reiterated.

The leader warned the lawmakers against losing their path and forgetting about their electorates.

He reminded them that they were elected to fulfil a certain role, that binds them to their people.

"Keep your focus, serve your people. They are all that you have. Don't let the lights and the shillings of this city fool you. At the end of the day, you must have dignity and honour to face your people as seek re-election," he said.

Duale further told them to keep their phones at hand, in case their electorates need to reach them.

The former Majority leader promised to work with the Legislative arm saying the leaders needed to coordinate and work together for the well-being of the generation.

"If anyone of you wants my help, please do not hesitate to visit my office. I will make time for you."

The former Majority Leader was among the 22 Cabinet Secretaries approved by the House on Wednesday morning.

Duale pledged a departure from Uhuru's style of using military in civilian duties.
News
3 months ago

Ruto preventing acrimony so he can get down to work and deliver without internal squabbles.
Siasa
3 months ago
Post a comment
WATCH: The latest videos from the Star
by SHARON MWENDE and LUKE AWICH
News
26 October 2022 - 15:34
Read The E-Paper