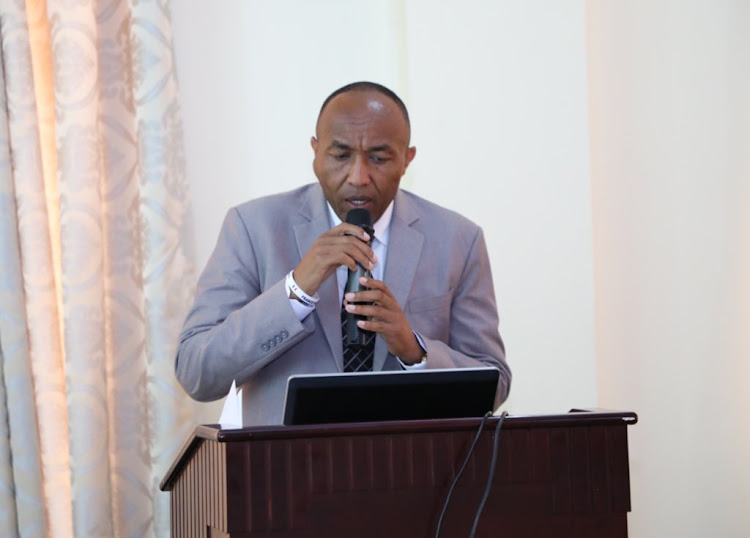 John Gachomo who was October 21, 2022 recalled from IAU

The appointment of former DCI’s Investigations Bureau director John Gachomo as the new director of the Internal Affairs Unit (IAU) was Friday cancelled in a surprising move.

This was two days after Gachomo was appointed as Director of IAU to take over from the new Director General of the Directorate of Criminal Investigation Mohamed Amin.

Insiders said Gachomo was in the process of taking over when he was recalled to Jogoo House awaiting further deployment.

Current IAU deputy director Esther Nganga, a commissioner of police who is also a lawyer was ordered to take over there waiting for a substantive appointment.

“Gachomo was recalled and we will have the deputy director there take over for now,” said an informed source.

The motive for the changes was not immediately known.

The unit is currently handling dozens of complaints against police, among them claims of extra-judicial killings.

This came as 21 police officers from the elite disbanded Directorate of Criminal Investigation (DCI’s) Special Service Unit (SSU) arrived there after they were summoned for further grilling over the issue of missing two Indians and their driver.

For now, police are investigating crimes of abduction and conspiracy to commit a felony.

Ten officers had appeared there on Monday and Tuesday before more were added and ordered to appear Friday, October 21.

They were told no firearms are allowed in the IAU offices. Those summoned include two Chief Inspectors, an inspector, three sergeants, nine corporals and five constables.

The team was last week disbanded and the officers were sent on leave pending further action.

They are among others under probe over the missing of the three persons.

Officials aware of the developments said this is part of a wider probe being conducted over claims of forceful disappearance under the police.

A two-day search for the two missing Indians and their driver in a thick forest has borne dozens of bones, belts and clothes.

More than 100 police officers were deployed to Aberdare Forest in search for Mohamed Zaid Sami Kidwai, Zulfiqar Ahmad Khan and their driver Nicodemus Mwania Mwange who were abducted near Ole Sereni and driven away in an unmarked car.

And after two days of search in the forest, they on Wednesday emerged with dozens of bones which they believed are human ones, belts and clothes.

They took them for safe custody ahead of a planned DNA.

Sources aware of the developments said they are not sure whose bones and clothes they are for now.

President William Ruto said he gave the go-ahead of the move to disband the unit as it had been linked to extra-judicial killings signaling there are more changes coming.

“Mimi mwenyewe niliamuru kuvunjwa kwa hicho kikosi sijui Special what (I ordered the disbandment of the unit). Our people were being found murdered and their bodies dumped in River Yala and other places. That is the sort of history we want to forget as a nation,” the President said.

The police probe linked the squad to the disappearance of the three men on July 24, 2022.

The squad is one of those under DCI and has been credited for solving a number of complicated crimes including robbery, murder, fraud and abduction.

It was revamped from the defunct Special Crimes Prevention Unit and named SSU in December 2019 when the then Flying Squad was also disbanded.

Police are holding two men in connection to the missing of the three since July 23.

Their car was blocked and armed men picked them up before vanishing.

Their car was found at the scene.

They were granted 21 days to detain them as they investigate the matter.

They are set to appear in court on October 21 for a mention of the case.

The two were arrested on suspicion a car they co-own was used as a getaway vehicle to take away the three.

They had a car hire business in South B.

They told police they are ICT experts who worked for two different companies.

In court, police said their car was placed at the scene where the three were abducted.

This was through a review of CCTV footage.

The investigators also said the two and others may be connected to the offence and that they could be government officials and associated with state officials.

Further, the police said they believe the two worked in cahoots with serving police officers and asked the court not to free them as this is likely to interfere with ongoing investigations.

“From the time the applicant took over investigations, and in the course of gathering evidence, it has faced interference from serving public servants including police officers,” says the court documents.

To date, the papers say the whereabouts of the victims are not known but efforts to trace them are in progress.

The investigators say the investigation is complex and requires more time and collaboration with other government agencies including India where Sami and Khan hail from.

The court granted the police 21 days on October 7 to hold the two as investigations go on.

For now, police are investigating a crime of abduction and conspiracy to commit a felony.

The two Indians are said to have been part of a team that had come to Kenya to join an IT team for Ruto to run the election campaigns.