Six million bags of fertiliser to be available before April - Ruto

Says the subsidised fertiliser will be available before the long rains season.

• He said the stock will be available before the long rains season which runs from mid March to early June. 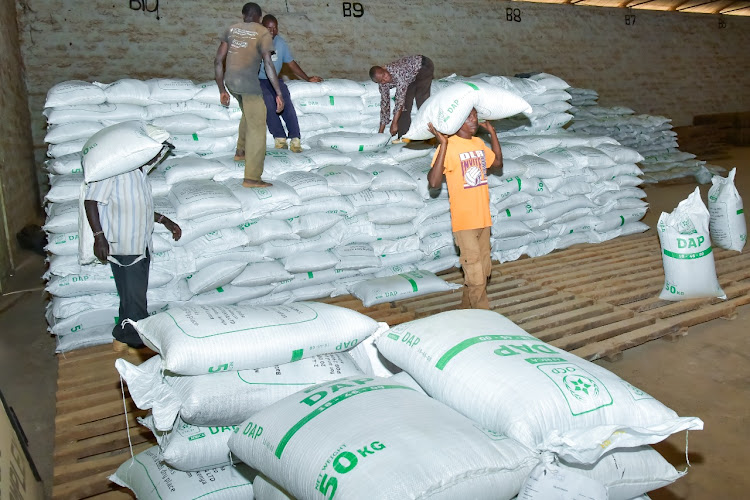 Farmers can heave another sigh of relief following a pledge by the government that six million bags of subsidisee fertiliser will be at their disposal before next year's planting season.

President William Ruto made the promise on Thursday in his address during Mashujaa Day celebrations at Uhuru Gardens, Nairobi.

"We have also made arrangements to make another six million bags of various types of fertiliser available for the long rains season," he said.

Ruto said his government had already made the first step to address the fertiliser challenge and made it available to counties and regions during the short rain planting season.

Some 1.5 million 50kg bags of fertiliser was imported and distributed at a cost of Sh3,500 per bag.

The President explained that with global fertiliser prices having more than doubled in the past two years following the Covid-19 pandemic, the extra costs were passed on to farmers.

"This had a huge impact on productivity of farmers last year. For example, maize production suffered a deficit of more than 10 million bags," Ruto said.

Farmers last month urged the government to ensure only genuine individuals benefit from the subsidised fertiliser.

Kenya Farmers Association director Kipkorir Menjo said the government should have data on the genuine small-scale farmers to prevent unscrupulous traders from benefiting from the subsidised supply.

"The Sh3,500 is good news for farmers in the Eastern and Central region but government should ensure the fertiliser gets to the farmers on time. The quantities are sufficient but only genuine farmers should benefit from this," Menjo said.

To land Tuesday at Mombasa at Sh5,617 per bag but farmers buy at Sh3,500.
News
3 months ago
Post a comment
WATCH: The latest videos from the Star
by MAUREEN KINYANJUI News Reporter
News
20 October 2022 - 15:13
Read The E-Paper