Rate has increased since May when Oxfam estimated that a person was dying every 48 seconds.

• The warning came as World Food Day was observed to highlight the plight of millions of people globally who cannot afford a healthy diet and regular access to nutritious food.

• In September 2021, Kenya declared a state of national disaster with almost three million people on the brink of starvation.

One person is likely to die of hunger every 36 seconds between now and the end of the year due to the current drought situation in East Africa, Oxfam warned on Monday.

The warning came as World Food Day was observed to highlight the plight of millions of people globally who cannot afford a healthy diet and regular access to nutritious food.

With the day falling on a Sunday, the celebrations were moved to Monday.

The day was marked amid an acute famine that has put 4.3 million Kenyans at risk after failed rains.

So far, nine counties severely hit by drought have been classified as the red zone. 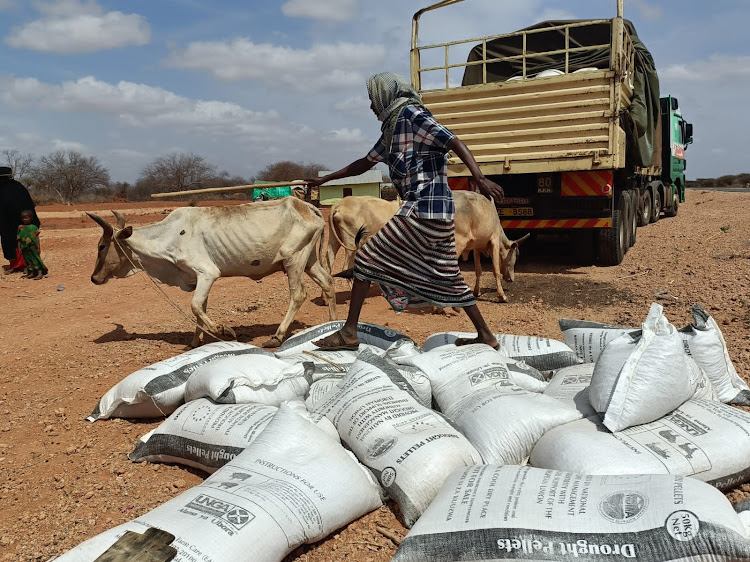 The animals feeds that were distributed in Nunow in Balambala subcounty, Garissa county.
Image: STEPHEN ASTARIKO

There is a high likelihood of a fifth failed rainy season in October, November and December to increase the number of people facing food insecurity from 3.5 million to 4.35 million.

Latest data by Oxfam suggests that the rate at which people in Somalia, Ethiopia and Kenya are dying of hunger has increased since May when it estimated that a person was dying every 48 seconds.

In September 2021, Kenya declared a state of national disaster with almost three million people on the brink of starvation.

The dangerous delays in providing help to millions has left many on the brink of starvation.

Much of the world's humanitarian aid in Africa focuses on emergency assistance. 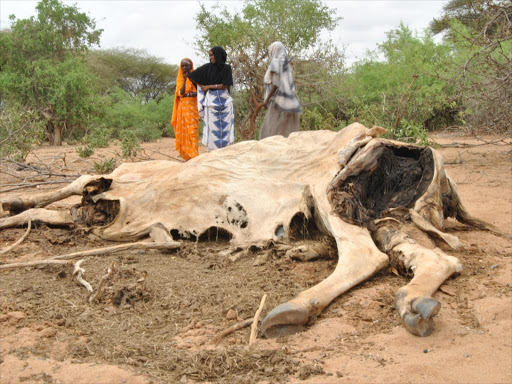 Women stand beside the carcass of a cow that died of lack of pasture in Saka, Garissa County, March 5, 2017. /THOMSON REUTERS FOUNDATION

This has led thousands of Kenyans who depend on farming and livestock to move to find new pasture and alternative sources of income and food as the drought continues.

According to USAID, effects of the COVID-19 pandemic, the deepening climate crisis, spiking prices for energy, food and fertiliser and armed conflicts including Russia's invasion of Ukraine have plunged millions into unprecedented levels of hunger and malnutrition.

Malnutrition rates have doubled since 2021 due to the worst drought cases experienced in some parts of Africa and Kenya over the last 40 years.

This has seen the government through the National drought management authority (NDMA) and the European Union stepping up drought mitigation measures to cater to the livestock in the drought-hit areas through the provision of animal pellets, disbursement of food, water and other emergency food assistance.

The SMART surveys conducted in June/July 2022, show that the nutrition situation has significantly deteriorated in the Arid and Semi-Arid Land regions.

Other countries facing drought in the Horn of Africa include Djibouti, Somalia, Sudan, South Sudan, Ethiopia and Uganda.

A spot check by the Star confirmed that zebras, gazelles, giraffes, warthogs and ostriches were roaming freely in the area
News
1 month ago

Africa to bear the brunt of climate change, expert says

Gachagua to preside over World Food Day as drought bites

The religious leaders noted that the high cost of living was aggravated by drought
Counties
1 month ago
Post a comment
WATCH: The latest videos from the Star
by MARGARET WANJIRU Health & Lifestyle Journalist
News
17 October 2022 - 22:07
Read The E-Paper