Video of tourists robbed during game drive in Samburu emerges

• In the one-minute 51-second clip, the raiders make it clear that they are not out to harm or kill anyone, all they want is cash. 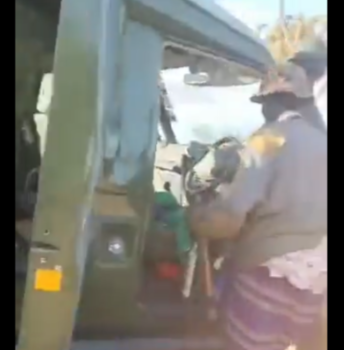 A screen grab of one of the raiders.
Image: SCREEN GRAB

A video has emerged online showing what appears like a daytime robbery by armed raiders on tourists at a Samburu game drive.

The undated clip doesn't capture faces of the alleged raiders but they can be heard asking for cash from the tour guide.

"Kwa nini hawa wazungu hawana pesa? (How come the white people don't have money?)," one of the raiders asks.

The guide then informs him that they carry their cash in form of credit cards.

He explains that the money can only be obtained once the card is inserted in an automated teller machine, popularly known as ATM.

The guide further informs him that all the cards have been confiscated by his colleagues including his.

"Hii ni wallet haina pesa ndugu yangu, hizo ni makaratasi zimechukuliwa uliza hata huyu (This is a wallet and has no money my brother, those are papers they have taken, you can ask your colleague," the guide explained after they started frisking him.

Game drives are a key activity in game reserves as it offers tourists a chance for game viewing.

The game drives are done in the open short savannah grasslands of reserves.

Samburu lies in the bandit-prone Kerio Valley region which has witnessed uncountable incidents of attacks over the years.

The tourist van in the clip has all its doors wide open and at some point, one of the raiders attempted to start the engine but was advised against it by the tour guide saying it's engaged in gear.

In the one minute 51 second clip, the raiders make it clear that they are not out to harm or kill anyone, all they want is cash.

One of the assailants then gives him his word that they are not going to kill anyone in the convoy.

The guide continues to discreetly record the raiders as they once again reassure him to assure the tourists that they are in safe hands.

And as they made their leave after the robbery, the guide made a desperate plea for them to leave him with at least Sh2,000.

They locked the doors and left.

Tourists have been robbed in a game drive in Samburu by armed raiders. pic.twitter.com/NTEj5lkqPc