They are accused of smuggling cocaine and heroin valued at about Sh25 million. 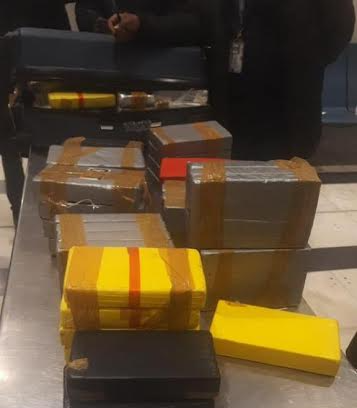 DRUG TRAFFICKING: Some of the packages of cocaine that was seized at Bole airport in Ethiopia on September 28, 2022.
Image: COURTESY

Three Kenyan women were arrested at India’s Chhatrapati Shivaji Maharaj International Airport in separate cases of smuggling of cocaine and heroin valued at about Sh25 million.

The latest incident happened on Sunday, when one Kenyan was intercepted with 980 grammes of white coloured powder that was later found to be cocaine and valued at Sh5 million.

Another Kenyan national had earlier on the same day arrived there from Addis Ababa and when a search was conduced on her, a packet containing 5.16kg of white powder suspected to be heroin was seized, officials said.

Local media cited customs officials, saying another Kenyan had on September 29 tried to smuggle 490 grammes of cocaine, concealed in her footwear.

The seized cocaine valued at Sh2.4 million was found concealed in a special cavity made in her footwear.

The customs officials said the incident happened when on secret information, the woman, who arrived from Kenya, was intercepted at the Mumbai airport.

"The customs had received information that a woman from Addis Ababa who was arriving from an Ethiopian airline flight was allegedly trying to smuggle cocaine in a special cavity made in her sandals,"an official said.

The woman was instructed to wait for a caller to handover the drugs.

The officials are trying to get details about her handlers. Meanwhile, the court has remanded her in judicial custody for 14 days.

One is likely to face up to 10 years in jail upon conviction for drug trafficking. Kenyan officials termed the trend alarming.

This is the latest string of incidents to happen in the recent days putting officials at the Jomo Kenyatta International Airport on the spot.

They are all said to have originated in Nairobi.

Kenyan detectives have opened investigations into the incidents.

On Wednesday last week, more than 97kg of cocaine worth more than Sh1.4 billion was seized at the Addis Ababa Bole International Airport.

The detectives also want to establish how the haul in two boxes and others managed to pass through checks at the airports.

The officials handling the case said they would talk to customs and Kenya Airports Authority staff who were on duty when the cargo passed before being intercepted at Bole and Mumbai.

Sources said the seizure is a warning Kenya is now a major transit route for the narcotics probably destined for Europe and Asia.

But the detectives said the latest trend of seizures of the narcotics locally point to a dangerous scenario that needs attention from authorities. A female passenger was arrested after she arrived with the luggage in Bole containing the narcotics.

Officials said preliminary tests had shown the drugs were worth 773 million birr ($14.6million).

The passenger who departed from the JKIA and arrived in Addis Ababa was arrested by the Customs Commission Airport Branch, as she tried to smuggle 97.48kg of cocaine within two suitcases.

Local media said the commission confirmed that the suspect was arrested trying to pass two bags weighing 48.62 and 48.86kg each, through the low risk level (Green Line), where transit passengers and passengers carrying duty-free and non-taxable goods exit.

She tried to hide the items in her luggage by wrapping them in aluminium foil, as if they were books, to avoid x-ray probation, but further inspection confirmed the luggage was packed with cocaine.

In 2019, then European Union Ambassador to Kenya Simon Mordue said the Kenyan port of Mombasa accounted for 30 per cent of illegal heroin smuggled into the EU market.

Kenyan security agencies seized the second-biggest haul of cocaine weighing 100kg and valued at Sh598 million in 2016 in Mombasa that was disguised as sugar.

The case was, however, later dismissed in court.

Cocaine worth Sh1.4bn from Nairobi seized at Ethiopian airport

The suspect was arrested trying to pass two bags weighing 48.62 and 48.86 kilograms.
News
4 months ago

The extradition and trial of the Akasha brothers in the US is a good example.
News
7 months ago
Post a comment
WATCH: The latest videos from the Star
by CYRUS OMBATI Chief Crime Reporter
News
04 October 2022 - 23:00
Read The E-Paper