Muhoozi Kainerugaba is the commander of Uganda People's Defence Force.

• But as if to mock Kenya for obeying the constitutional provision on the presidential term limit, Kainerugaba laughed off the idea saying, "you must be joking". 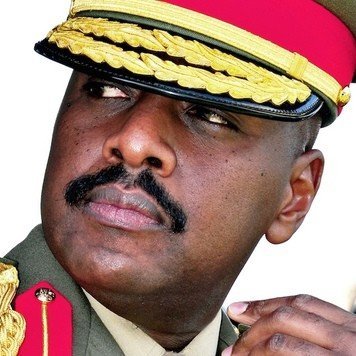 Muhoozi Kainerugaba, the commander of the Uganda People's Defence Force (UPDF), said the former head of state would have easily won the contest.

"My only problem with my beloved big brother is that he didn't stand for a third term. We would have won easily," Muhoozi said in a series of tweets.

Uhuru retired at the end of his second term in tandem with the Constitution which caps presidential term limit at ten years.

He handed over power to his successor President William Ruto who won the August 9 election, beating his closest rival Raila Odinga to second place.

But as if to mock Kenya for its fidelity to the Constitution on the presidential term limit, Muhoozi laughed off the idea saying, "you must be joking".

"Haha! I love my Kenyan relatives. Constitution? Rule of law? You must be joking! For us there is only the Revolution and you will soon learn about it," he said.

The National Resistance Movement, the NRM, has been the ruling political party in Uganda since 1986 when Museveni came to power.

Museveni appointed Muhoozi the commander of land forces in the army in June 2021.

It was the second time Museveni was promoting his son, now aged 49, in the hierarchy of the army in a span of six months.

Prior to the appointment, Muhoozi was head of the Special Forces Command (SFC), an elite unit that specialises in protecting the President and the first family.

The army commander has a penchant for posting warning messages on social media targeted at perceived Uganda's 'enemies'.

Muhoozi's rapid rise in the military ranks over the years raised eyebrows and moved many within and outside Uganda to view him as his father's preferred successor.

Museveni, however, denied grooming him as his successor.

In May this year, Muhoozi also clarified that it has never been his dream to become the president.

"I have never dreamed about it! All I want and what we will struggle for and definitely achieve are the interests of our generation," he said.