NPS said the team has registered success in its operations.

•The Service said additional troops with specialized equipment have since been deployed to ensure that all firearms are recovered and normalcy is returned to the area.

•NPS thanked the public for helping them trace any suspicious activities in the area. 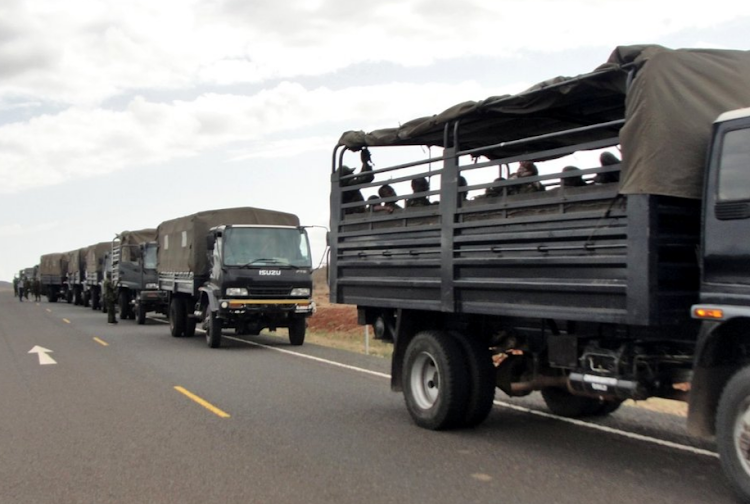 A multi-agency security team conducting an operation in Turkana to weed out bandits on Monday recovered rifles and rounds of ammunition in Turkana East Sub-County.

In a statement by the National Police Service, the 'Operation Komesha Unalifu in North Rift' intensified patrols in the area after the recent banditry attacks that left 11 people including police officers dead.

The Service said additional troops with specialized equipment have since been deployed to ensure that all firearms are recovered and normalcy returns in the area.

NPS thanked the public for helping them trace any suspicious activities in the area.

"As the NPS, we thank the members of the public for their continued cooperation and support, and request that they continue sharing timely information to make the operation a success."

NPS further said the multi-agency team has registered success in its operations in Baringo and Turkana Counties.

On September 24, 11 people were killed following a bandit attack in Kakiteiteu Village in Turkana East sub-county.

They were ambushed as they pursued heavily armed bandits suspected to be from the neighbouring Baringo county.

On September 25, President William Ruto instructed security agencies to firmly deal with the perpetrators of the attack.

"I have instructed security agencies to deal firmly, decisively and conclusively with those involved. Cattle rustling will stop na sio tafadhali."

On Sunday, Turkana South MP Ariko Namoit said he will sponsor a bill in parliament to compel the government to compensate victims of banditry attacks.

He spoke during a funeral service of the September 24, banditry attack victims in Lokichar.

"I am doing this so when people are attacked, families can be compensated and get justice," he said.

He called on those involved in banditry to return guns they own, before the law catches up with them.
News
4 months ago

Four-pronged approach can be deployed to address this vexing and barbaric practice of livestock theft.
Opinion
3 months ago
Post a comment
WATCH: The latest videos from the Star
by SHARON MWENDE
News
03 October 2022 - 20:06
Read The E-Paper