Say most nominees have pending court cases including accusations of murder, rape and corruption 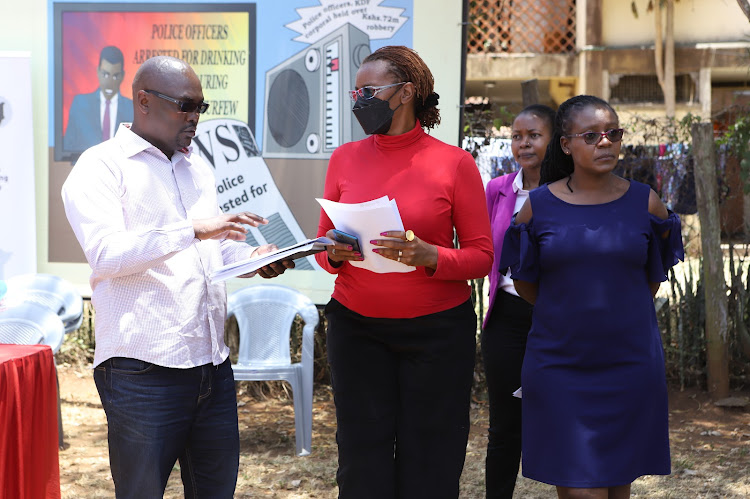 A human rights lobby has asked MPs to reject Cabinet nominees who have integrity issues.

The Kenya Human Rights Commission on Thursday threatened to go to court if the nominees are approved by Parliament and eventually appointed.

President William Ruto on Tuesday unveiled a 22-member Cabinet team to be vetted by the National Assembly for appointment.

KHRC executive director Davis Malombe said most of the nominees have pending court cases including accusations of murder, rape and corruption.

He spoke during a press briefing at their offices in Nairobi on Thursday.

“The CS appointments fail to adhere to Chapter Six on Leadership and Integrity, the two-third gender rule and ethnic balance,” Malombe said.

The official said the list points to an exercise of rewarding political cronies as well as the establishment of unconstitutional portfolios.

“The list can be construed as a reward for the President’s sycophants, a move that fails the governance test of balancing politics, economics, and social aspects in the selection of Cabinet members,” he said.

Malombe said more than seven appointees to the Kenya Kwanza Cabinet have allegedly been implicated in grave crimes including corruption, rape and murder and have ongoing court cases.

“This begs the question on the intent to protect, respect and uphold the Constitution,” he said.

Jumwa was nominated CS for Public Service and Gender. She is facing murder charges.

Linturi is also facing charges of attempting to rape a woman at a Nanyuki hotel in September 2021. He denied the allegations and was freed on a Sh500,000 bond.

Chirchir was ousted from the Ministry of Energy, the same position Ruto has proposed him to head.

He was suspended as Energy CS in 2014 after a UK court, alleged he pocketed millions of shillings in bribes to award lucrative ballot paper printing contracts to British company Smith & Ouzman while working at defunct electoral commission IIEC.

Namwamba's scandal plagued the Public Accounts Committee of the National Assembly and was the first ever to be disbanded on allegations of corruption.

They were sent home after an investigation into claims that its members had been using their positions to enrich themselves through extortion and blackmail.

KHRC official Martin Mavenjina said Chapter Six of the Constitution has once again been dealt a blow.

“The above reflects a bleak and dire future that if unchecked will undoubtedly manifest in a state of anarchy thereby pushing back the gains thus far,” he said.

“A nominee like Chirchir was sent out of the same office on allegations of abuse of office where Kenyans lost millions.”

The human rights activists also want Ruto to ensure the actualisation of the two-third gender rule in accordance with the law.

The President nominated seven women to his 22-member Cabinet.

“Article 27 states that not more than two-thirds of the members of elective or appointive bodies shall be of the same gender, this has not been honoured,” Mavenjina said.

The organisation said the President signed the charter of inclusion, “which clearly from the Cabinet appointments is far-fetched and disrespectful to special interest groups and Kenyans who voted him to the office on this accord.”

KHRC programme advisor Irene Soila said the appointments do not reflect the regional and ethnic diversity of the people of Kenya.

“It is safe to conclude that the current cabinet composition will continue to exacerbate the long-fought ethnic disgruntlement battle and draws back on the inclusion gains.”

The team also raised concerns about the creation of new Cabinet positions not envisioned in the 2010 Constitution.

Malombe said the government through the Cabinet appointment has demonstrated continuity in breach of the Constitution by extending life to the prime CS positions.

"The Constitution assigns the mandate to establish and abolish public offices exclusively to the Public Service Commission,” he said.

The commission said the move is a brazen abuse of power and the Office of the Presidency, if unchecked, will continue to burden the taxpayer with the ballooning wage bill and deepen the current unsustainable public debt.

“The country will be forced to borrow to meet the recurrent budget and further stretch the development budget thus depriving the 'hustler' access to basic services,” Malombe said.

KHRC urged parliament to reject the list of nominees to allow the President to review his list.

“Some people on the list are elected leaders and will cost Kenyans billions in by-elections, to fill their positions,” Malombe said.

Ruto will then gazette the appointment of the nominees to serve in the cabinet.
News
4 months ago

Ruto had promised to give a half of his Cabinet Secretary slots to women.
News
4 months ago

Chirchir's in-tray full as he makes comeback to energy docket

Ababu faces a herculean task of resolving the existing impasse between the government and the world football governing body, Fifa.
News
4 months ago

The rise and rise of Aisha Jumwa

Before joining politics, she worked in a construction company in Kilifi.
News
3 months ago
Post a comment
WATCH: The latest videos from the Star
by Akello Odenyo Court Reporter
News
30 September 2022 - 23:00
Read The E-Paper