He termed as a farce the court's judgment on six of the nine issues under determination.

• On the question of whether Ruto attained 50 per cent+1 of the votes cast, Raila said the Court treated the matter in a cavalier manner and allowed IEBC to “explain away” the grievous concerns raised by the Petitioners. 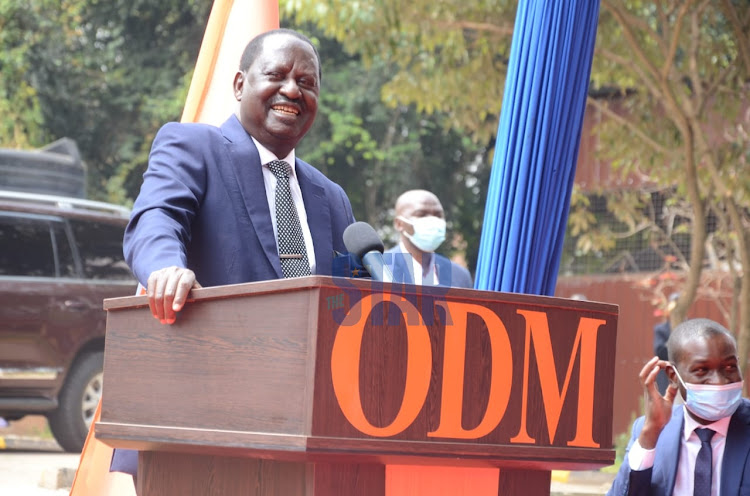 Azimio leader Raila Odinga has issued a detailed critique of the Supreme Court's full judgment on his petition which the court dismissed as lacking sufficient evidence.

Raila cited absurdities in the court's judgment on six of the nine issues that were under determination in the consolidated petition that sought to overturn President William Ruto's win at the August 9 polls.

On the question of whether Ruto attained 50 per cent+1 of the votes cast, Raila said the Court treated the matter in a cavalier manner and allowed IEBC to “explain away” the grievous concerns raised by the Petitioners.

"For instance, Wafula Chebukati had told the country unequivocally that the voter turnout was 65.4 per cent and that the same would vise. He had then revised that figure to 64.76 per cent," Raila said.

He said this was despite petitioners providing evidence to prove that the figures IEBC was using were “a moving target” and were being changed without explanation to ensure that Ruto achieved 50 + 1.

"The Court simply accepted IEBC brushing away the issue as a mistake. In fact, the Court characterized this as an “announcement error”, Raila said.

On whether IEBC carried out verification of tallying and declaration of results in accordance with the law, Raila said the court faulted IEBC chairman Wafula Chebukati for unilaterally declaring poll results in the exclusion of the other commissioners against the legal provision that requires the commission to do collectively.

But ironically, Raila noted, the court ruled that it could not nullify an election on the basis of a last-minute boardroom rupture and quorum antics saying doing so would set a dangerous precedent.

"The Court finds, like it had to, that there was a boardroom rupture and that the Commission has to act in unison, but curiously says there is no evidence of violation of the Constitution," Raila said.

"We wonder whether the Supreme Court itself would view a 3-4 ruling – with a majority of Judges in dissent – as the Judgment of the court," he added.

On whether the postponement of elections in Kakamega and Mombasa counties affected voter turnout in his strongholds, Raila said the cancelling of the polls resulted in a 4 per cent decline in voter turnout compared to neighbouring counties and this was all IEBC's fault.

But even then, Raila said the court still went ahead and insulted the petitioners by referring to their claims as red herring.

"Was it not sufficient to simply rule that the Court did not believe that the postponement affected the voter turnout in a way that could alter the final result of the election? Raila posed.

Raila also poked holes in the apex court's conclusion on whether there was a difference between Forms 34A uploaded on the IEBC public portal and Forms 34A received at the national tallying centre at the Bomas of Kenya and those issued at to agents at polling stations.

The Azimio leader said the court never asked IEBC to explain where the booklets were or  where they had been used, or where the counterfoils were.

He said the court instead opted to attack and threaten Celestine Opiyo and Arnold Oginga, the petitioners' advocates who dared raise the issue.

"This virulent attack on the Petitioners’ Advocates was not based on any evidence of forgery or fabrication. It was based on an opinion of IEBC which the Court had decided concluded the truth on the issue," Raila said.

He also termed as a farce the court's findings on whether there was interference with the uploading and transmission of Forms 34A from polling station to the IEBC public portal.

Raila said the court's findings on the issue reads more like an IEBC operational manual rather than a judicial analysis of a contested fact.

He said the court merely accepted IEBC's explanation on the allegations of tampering with the Forms and struck out petitioners' evidence on what had happened during the scrutiny of the portal.

"The Court regurgitated what IEBC had said and declared it to be a judicial finding," he said.

"This rejection of the Petitioner’s submission was reminiscent of the 2013 striking out the“Raila Affidavit” which ensured that the fraud of IEBC was never revealed," Raila added.

"But in this case it is worse because the court generated its own evidence and then rejected the evidence of the parties."

On whether the technology deployed by the IEBC met the standards of integrity, verifiability, security, and transparency to guarantee accurate and verifiable results, Raila said the court ran away from, or totally ignored the evidence of the Directorate of Criminal Investigations.

He said the court never mentioned the affidavit evidence filed by running mate Martha Karua and said that there was no evidence whatsoever that met the requisite standard of proof was presented before court.

Raila said the court ignored Karua's evidence which was based on two forensic reports by the DCI which proved their case on the technology issue.

"They did not want to see the evidence," Raila said, yet the court went ahead to note that cases are won or lost on evidence placed before it.