Disruption at City Hall as election of speaker begins

The MCAs are casting their votes via a secret ballot.

• Clerk Gichana directed that the sergeants at arms place the ballot boxes at the right position.

• The sergeants confirmed the ballot boxes were empty before the voting started. 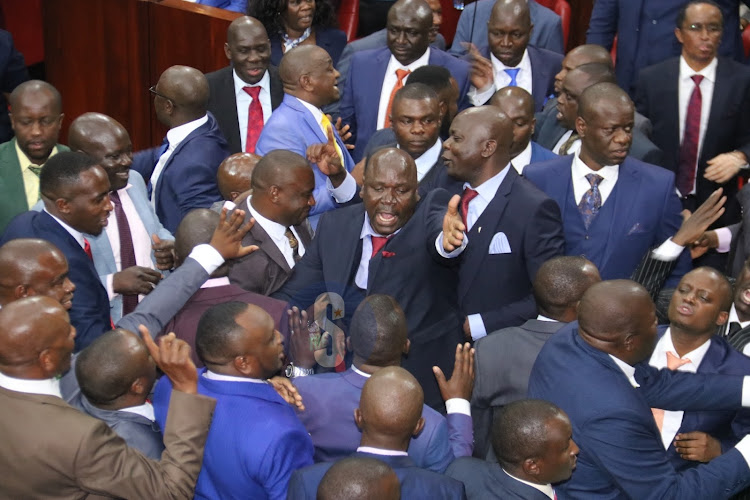 There was a slight disruption at the Nairobi County Assembly as the election of the Speaker began.

The disruption was a result of a confrontation between Members of the County Assembly allied to Kenya Kwanza and those of Azimio la Umoja One Kenya Alliance.

Ngara MCA Chege Mwaura said the ballot boxes were placed in a manner that would allow the legislators to see how the voting process will be done.

Umoja One MCA Mark Mugambi noted that the placement of the boxes breeches secrecy.

From the Azimio coalition, Makongeni MCA Peter Imwatok bashed his counterparts arguing that the ballot boxes had been placed where they were in the past elections.

Kilimani MCA Moses Ogeto said the issues raised by their counterparts are not legislative and are not anchored in the standing orders.

Clerk Gichana directed the sergeants at arms to place the ballot boxes in the right position.

The MCAs are now casting their votes via a secret ballot.

The sergeants confirmed the ballot boxes were empty before the voting started.

The ballot boxes are placed on the right and left sides of the floor of the house.

MCAs who are physically challenged were given first priority.

Post a comment
WATCH: The latest videos from the Star
by MAUREEN KINYANJUI News Reporter
News
29 September 2022 - 14:25
Read The E-Paper