Ruto met with all outgoing CSs shortly before appointing the new cabinet.

• Quoting scriptures from Psalm 23:5, Ngunyi wondered why the leaders agreed to have a humiliating sit down.

• "Cabinet was served some humble pies. Why didn't they resign? They will be fired anyway! Or are they hopeful? Zero." 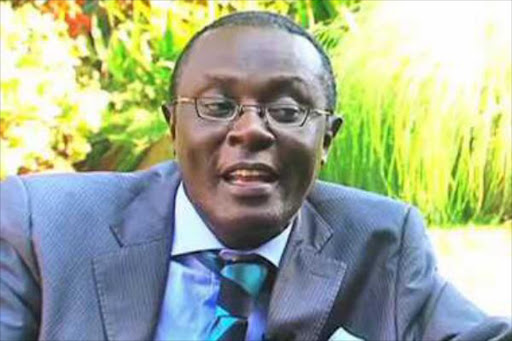 Political Analyst Mutahi Ngunyi has weighed in on the meeting President William Ruto held with the outgoing cabinet secretaries.

Quoting scriptures from Psalm 23:5, Ngunyi wondered why the leaders agreed to have a humiliating sit down.

"He prepares a table before me in the presence of my enemies (Psalms 23:5). The Ruto script is either complex or comical," he tweeted on Tuesday.

"Cabinet was served some humble pies. Why didn't they resign? They will be fired anyway! Or are they hopeful? Zero."

Ruto on Tuesday chaired the meeting at State House.

He took to handshake them all, as he recognized the former Interior Security CS Fred Matiang'i.

During the meeting, Matiang'i and Ruto shared a light moment where they were seen talking and laughing.

Present was the former ICT CS Joe Mucheru, who during the campaign and election period of August 9, general elections, was accused of being biased.

On Wednesday, Munya was a no-show during the flagging off of subsidized fertilizer, which was led by Deputy President Rigathi Gachagua.

Wamalwa has been in several clashes with Ruto in the past.

The meeting took place shortly before the President appointed his cabinet.

On Monday, Ngunyi called on Ruto to appoint his government, saying he was weak without it.

Ruto is expected to name his Cabinet soon.
News
4 months ago

The new position was created by an Executive Order.
News
4 months ago

Matiang'i, Mucheru and Tobiko were also present.
InPictures
4 months ago
Post a comment
WATCH: The latest videos from the Star
by SHARON MWENDE
News
27 September 2022 - 20:36
Read The E-Paper