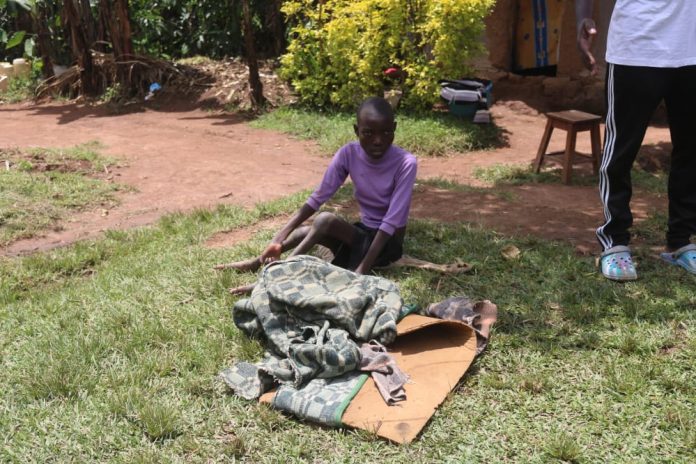 A family in Kakamega County is seeking medical help for their daughter who developed sudden paralysis seven years ago.

Ronika Irako, 13 years old from Buyangu village in Malava sub-county was born a normal healthy kid but developed paralysis of her legs and hands when she hit seven years old.

The grade five pupil at Buyangu primary school has since been forced to drop out of school as the disease progressed and rendered completely paralyzed and unable to fend for herself.

Irako who says her dream is to become a medical doctor in future worries that she may never get to realize her dream because of the strange illness that’s is ravaging her body.

“It has always been my dream since I was a small kid and that’s why even with this sickness, I have been trying to go to school. But recently, my body became too weak and I have forced to leave school. I don’t know what will become of me.Nobody knows why I am like this and it makes me sad,” said Irako.

Her mother Ruth Makonjio narrates that her daughter’s illness began when she was in grade two as she would constantly complain of pain in her knees every morning after waking up.

“I didn’t think much about it because otherwise, she was a healthy baby. I didn’t know how serious until one morning she woke up and couldn’t move her legs completely,” she said.

The frustrated mother says efforts to seek medical help for her daughter have been futile as the hospitals have been unable to offer a diagnosis for her condition.

“We have been to Malava hospital, the Kakamega general hospital and even to Bungoma hospital but all tests have shown that there is nothing wrong with her. It’s painful getting such results yet one can clearly see that everything is wrong with our daughter,” she says.

She was forced to carry her daughter to and from school to enable her keep up with her classes but eventually says she gave up as her sick back could not allow her carry her now 13 year old daughter on her back.

“She can’t walk but can crawl. Initially, she would crawl to school but then I realised it was making her hands and backside sore so I would carry her to and from school. My health isn’t that good and so my back gave in and I couldn’t anymore. So now she doesn’t go to school,”she said.

The distraught mother says the family has since exhausted all their sources of income trying to find a cure for their daughter after they sold their piece of land and cows towards the same.

They are now appealing to well-wishers to intervene and help them find a cure for Irako to enable her live a normal life, go back to school and realize her dream of becoming a doctor.

The girl’s father abandoned the family years back after several failed medical attempts to find a cure for the girl.

The mother of six has no job and relies on menial jobs like weeding people’s farms at a small fee to be able to sustain herself and her children.

“My husband made it clear that it was too much for him and left. Irako only has me and am not going to give up on her. I pray that someone will, help my daughter to be normal again. She needs a wheelchair to help her move around. I know I am raising a doctor no matter what she going through now,”she said.

Ronika Irako,13,is paralyzed in the hands and legs.She wants to be a doctor in future.
Image: CHETI PRAXIDES
Post a comment
WATCH: The latest videos from the Star
by CHETI PRAXIDES Correspondent,Coast Region.
News
24 September 2022 - 11:32
Read The E-Paper