Trans Nzoia Governor George Natembeya said they will be screened and treated. 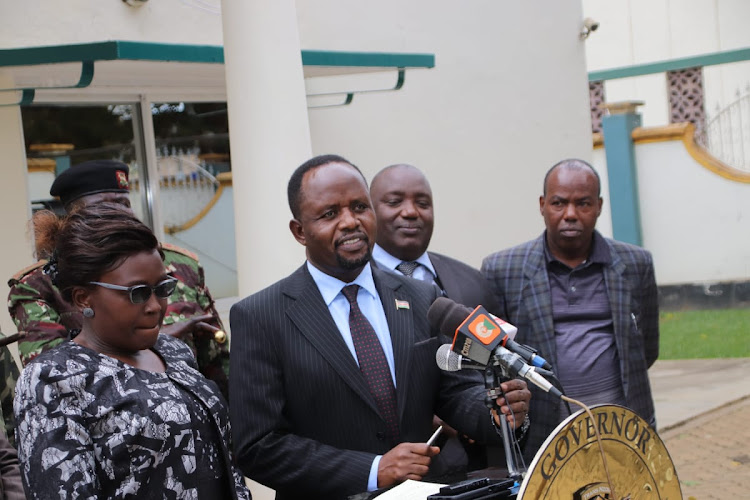 Residents of Trans Nzoia have been asked to report persons exhibiting symptoms related to the Ebola virus.

Trans Nzoia Governor George Natembeya said through cooperation of local communities those suspected to be exhibiting the symptoms will be screened and treated.

He said plans for an establishment of a screening centre for persons entering the country from neighbouring Uganda were underway.

Natembeya said relevant government agencies were working together to ensure the safety of residents, especially those living along the border.

“We wish to inform our people to be alert to the fact that Ebola has been detected in Uganda. This alert is aimed at ensuring that we safeguard our people from contracting the disease,” he said.

This follows an alert of an infection in the district of Mubende in Western Uganda where close to seven people have been found to have been infected.

The cases of the Ebola virus were detected on September 11.

He said the county was currently monitoring the situation to avert a possible introduction of the disease.

He said his administration is already facing some challenges among them logistics and the passage of the travellers from Uganda through Suam border.

Natembeya ordered for mobilisation of all relevant stakeholders on prevention, preparedness and response measures.

He urged residents not to panic since his administration in collaboration with the national government had put measures in place to curb the spread of the virus.

Trans Nzoia county commissioner Mathias Rioba said the government was working round the clock to prevent the introduction of the disease reactivating rapid response teams at both the county and subcounty levels.

He said mapping of illegal crossing points to minimise cross boarder movements was being undertaken.

Rioba said the government will prioritise planning for logistics to enable health personnel to carry out the screening of those suspected to be exhibiting Ebola symptoms.

He called for sensitisation of all health workers on infection and control.

“Any traveller from the Western part of Uganda should be reported to the health department and other security agencies, to guarantee the safety of our people,” he said.

WHO declared resurgence of Ebola in DR Congo, after confirming one case near Rwanda.
News
1 month ago

Trans Nzoia Governor George Natembeya said they will be screened and treated.
News
3 days ago

On Tuesday, Uganda confirmed the outbreak of Ebola Virus Disease (EVD).
News
6 days ago
Post a comment
WATCH: The latest videos from the Star
by DAVID MUSUNDI
News
23 September 2022 - 23:00
Read The E-Paper