He asked them to enact a law that would rein in on corrupt governors.

• The CS further noted that some counties are inefficient in spending their equitable shareable revenue and leave it to accumulate for several months of up to Sh5 billion.

• He further said some of the projects recorded by the Auditor General as having been completed only exist on paper. 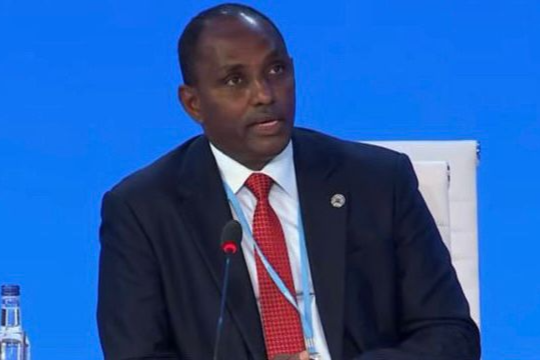 Treasury CS Ukur Yatani has challenged the Senate to stamp its authority over the mismanagement of county funds.

The CS asked senators on Thursday during their induction to formulate a law to deal with the vice, noting that it's incumbent upon them to ensure prudent expenditure of county resources.

"We need to have a supporting law in dealing with areas where there are clear cases of mismanagement of resources," Yatani said.

He reminded the legislators that the Treasury is under law at liberty to withhold resources meant for counties on the strength of financial misappropriation.

Yatani, however, said that the enforcement of the law was crippled after the Senate failed to give its nod.

"When I was new at the National Treasury, I tried it, the National Assembly cooperated with us but unfortunately it did not see the light of the day in the Senate.

"So it gave illegal powers and authority to the governors to spend in whatever way they want and to some extent, it was not possible to extend even the payment of pending bills," Yatani said.

The CS further noted that some counties are inefficient in spending their equitable shareable revenue and leave it to accumulate for several months up to Sh5 billion.

"That's not a good use of money. That money should have actually gone elsewhere to support other sectors of the economy," Yatani said.

He pointed out that this is a huge challenge to the Treasury since there is no law that mandates it to stop the disbursement of resources to counties that are not spending their share.

"I'm also not sure whether what we see in the Auditor General's reports is what we see on the ground. We see clean records as far as counties are concerned when in real sense the situation is very bad on the ground."

Yatani said the projects recorded by the Auditor General as having been completed only exist on paper.

"And through this, corruption has thrived in the county governments to the extent that I'm not even sure whether the dream of the Constitution making organs are fully realised."

The CS challenged the Senate as the custodian of devolution to address the challenges which he said have impoverished businesses due to unpaid bills.

He says the government collects money and spends it on a daily basis.
News
2 weeks ago

She has also called for speedy transfer of all devolved functions and their attendant funds.
News
2 weeks ago
Post a comment
WATCH: The latest videos from the Star
by EMMANUEL WANJALA Radio, Print & Digital Reporter
News
22 September 2022 - 14:02
Read The E-Paper