Karua took to twitter to celebrate herself thanking God for another year.

• Karua was a former long-standing member of parliament for Gichugu Constituency and an advocate of the High Court of Kenya.

• She was a key role in the fight for gender equality during fight for introduction of multi-party democracy in 1980s. 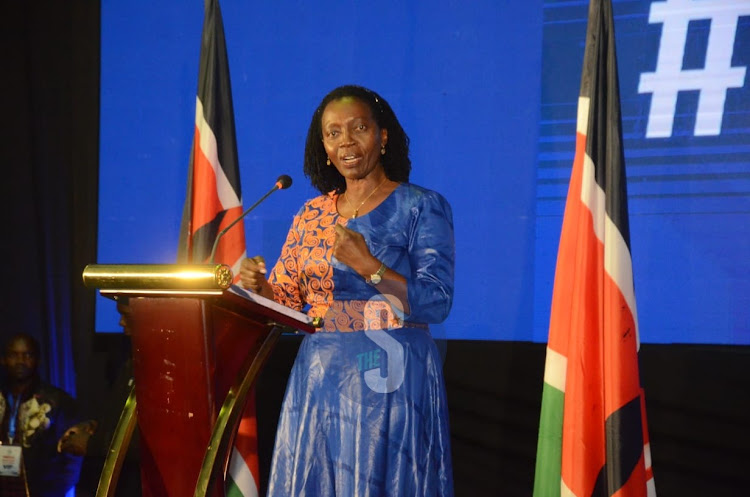 Karua took to Twitter to celebrate herself thanking God for another year.

"Sixty-five today and thanking God for it," Karua tweeted.

Azimio leader Raila Odinga was among Kenyans who celebrated her on social media as she turned a year older.

Raila wished Karua many years of celebration. "Happy Birthday Mate. To many more!"

Karua was a former long-standing member of parliament for Gichugu Constituency and an advocate of the High Court of Kenya.

Karua served as a magistrate in various courts from 1980 to 1987 and ventured into private practice until in 2002.

She unsuccessfully contested for the presidential seat in 2013 and managed a distant position six.

She served in the ministry of water until her resignation after a fall-off with the then president Mwai Kibaki in 2008.

Karua in the quest to seek justice petitioned the election results to the court of appeal and the Supreme Court.

After losing in both the Supreme Court and the Court of Appeal, Karua opted for the East African Court of Justice in Arusha.

The court found the Kenyan government at fault and awarded her Sh2.7 million in damages for infringement of her right to a fair trial.

In 2022, Azimio settled on Karua after consultation through a running mate selection panellist.

Karua defied all the odds and got nominated to be the running mate of the Azimio coalition in May by the party leader Raila Odinga.

Her nomination saw her make a comeback to the political scene. However the Azimio coalition came second in the August polls.

Azimio camp led by Raila Odinga and Karua filed a petition to the Supreme Court challenging his win.

The Supreme Court upheld Ruto's win and he was sworn in on September 13.

Karua, however, hinted that she might be moving to the East African Court of Justice because she was unsatisfied with Supreme Court ruling.

Karua has not yet stated her next move in politics.

Karua to Nassir: Work with government but don't kneel down

Karua said Nassir should continue with the good work whos foundation had been laid by Joho.
News
2 weeks ago

He says he realised he didn’t belong to Kenya Kwanza's school of thought.
News
1 week ago

We shall prosecute those who assaulted Ledama, Karua says

She said they have a video as evidence on what transpired.
News
2 weeks ago
Post a comment
WATCH: The latest videos from the Star
by PERPETUA ETYANG
News
22 September 2022 - 12:38
Read The E-Paper