• Ndotto, 80, had served for two consecutive terms and was defending his seat. 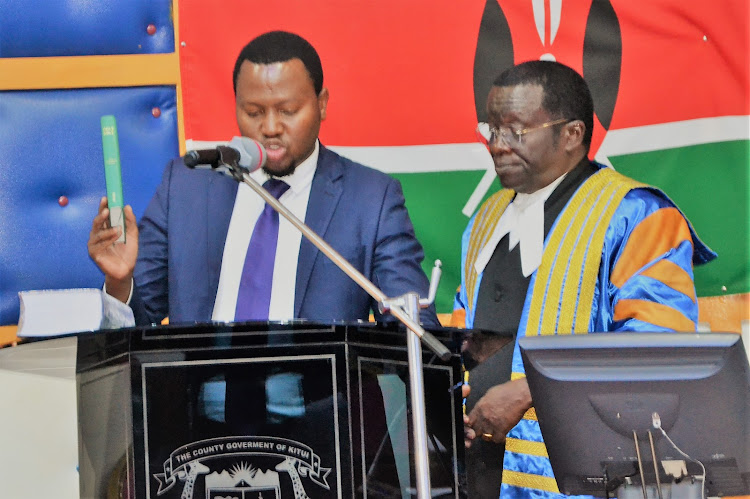 He floored eight other contestants.

Former speaker George Ndotto suffered a humiliating defeat in the hands of Katisya, 50 years his junior.

Ndotto, 80, served for two consecutive terms and was defending his seat.

He got a paltry six votes to Katisya's 51 during a second round of voting.

The election was held on Wednesday at the Kitui assembly; clerk Elijah Mutambuki was the returning officer.

All 57 MCAs present participated in the voting.

Voting went to the second round after no clear winner emerged in round one.

None of the nine candidates garnered the requisite two-thirds of the total votes in the first round.

In the initial results, Katisya led with 25 votes with Ndotto coming a distant second with nine.

The two were paired up in the second round, where Ndotto’s votes dropped by three to six, while Kaitisya’s doubled to 51 , giving him a resounding win.

In the first round, Benjamin Mwikya Musyoki got eight votes, Augustus Kyalo Muli seven, Boniface Kilaa Kasina six, while Paul Ngula Kitungu and Samson Masila got one vote each.

Victor Kyalo Mutua and Andrew Ndisya Lisa got no votes.

In his acceptance speech, Katisya pledged to serve all diligently and fairly, according to the rules of the assembly and the Constitution.

He promised to steer the assembly to perform its oversight role and ensure optimum provision of services to the people of Kitui.

Wiper party nominees for disabled persons' and marginalised have not been gazetted.
Counties
1 week ago
Post a comment
WATCH: The latest videos from the Star
by MUSEMBI NZENGU News Correspondent
News
21 September 2022 - 23:00
Read The E-Paper