• 47 counties are called to activate their rapid response teams in preparation for any eventuality. 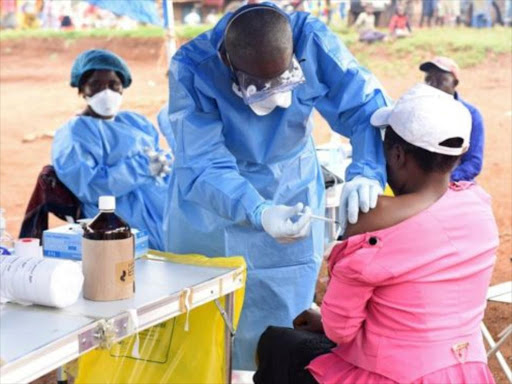 Health workers in DR Congo have been vaccinating people against Ebola to prevent the spread of the virus.
Image: FILE

Health CS Mutahi Kagwe has urged the members of the public to report any suspected case of Ebola following an outbreak in Mubende District, Uganda.

In a statement, the CS stated the symptoms of Ebola, calling on all the 47 counties to activate their rapid response teams in preparation for any eventuality.

This is in an effort to support identification of any suspected cases.

Kagwe said that the outbreak  puts Kenya at a high risk of disease importation and therefore members of the public need to be vigilant.

“The two countries share a long common border that is mostly porous. It is important to note that there is substantial human traffic between Uganda and Kenya for trade and other socio-economic activities,” Kagwe said.

Ugandan, had on Tuesday confirmed the outbreak of Ebola Virus Disease (EVD).

The government said the confirmed case was a 24-year-old male, who had shown the symptoms but later succumbed to the disease.