He said major area of dissatisfaction in the counties is the delay in transferring all the devolved functions. 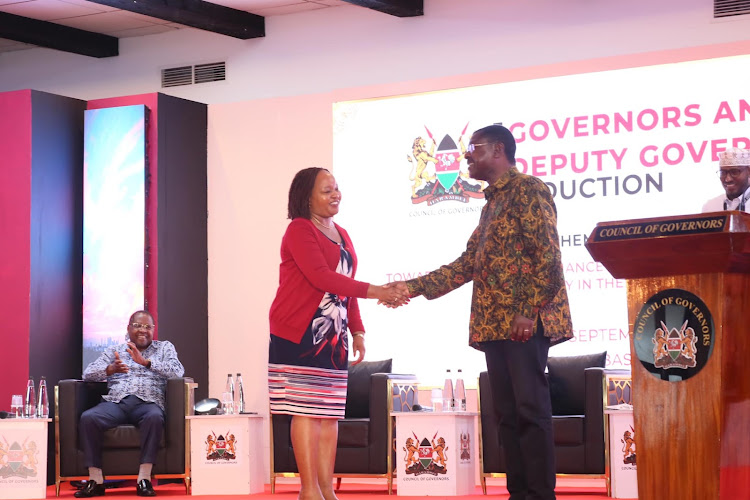 Council of Governor chairperson Anne Waiguru and National Assembly Speaker Moses Wetangula during the closing ceremony of the induction workshop for governors in Mombasa on Saturday.
Image: HANDOUT/PARLIAMENT

The Council of Governors has welcomed the directive by President William Ruto that the Ministry of Devolution should fast-track the transfer of all devolved functions to counties.

On Saturday, President Ruto said one major area of dissatisfaction in the counties is the delay in transferring all the devolved functions.

“We are committed to the complete transfer of all functions constitutionally earmarked for the counties. I, therefore, want to direct the Ministry of Devolution to complete the process of unbundling all these functions and the National Treasury to avail the necessary funds to complete the exercise,” said Ruto.

The Head of State also said he is aware that the valuation and transfer of assets and liabilities relating to the devolved functions have not been completed due to insufficient funds.

“I am therefore directing the National Treasury to provide sufficient funds for this task to the Ministry of Devolution to ensure that the exercise is completed,” he said.

In a speech, read on his behalf by the Speaker of the National Assembly Moses Wetangula during the closing ceremony of the induction workshop of governors and their deputies, Ruto said since 2013, Kenya has experienced commendable socio-economic development because of devolution.

According to President Ruto, the county governments have in the last nine years received in excess of Sh3.2 trillion as the equitable share of the revenue.

He said some of the key economic sectors that have benefitted from this investment include; health, education, water, roads, energy, housing, agriculture, and trade.

For example, Ruto said, in the health and education sectors, counties constructed 1,419 dispensaries and 821 Early Childhood Development (ECD) centers between 2013 and 2018.

Despite these developments, the county governments have been raising concerns over the delays in the disbursement of the equitable share of revenue by the National Government.

Ruto said he is committed to ensuring that the shareable revenue is transferred to counties in a timely and predictable manner and in accordance with the law.

“This will ensure that the counties carry on with their development activities without interruptions including meeting their financial obligations,” said Ruto.

“Accordingly, I will engage the National Treasury to ensure that there are no further delays and that all disbursements to the counties are done on time to enable Counties meet their obligations,” he said.

According to Ruto, the average potential of Own Source Revenue for the 47 counties is Sh171.7 billion. However, actual collections have averaged Sh32.9 billion, which is a huge shortfall on the expected revenues of the counties.

“This, therefore, means that the counties are unable to meet their budgetary commitments. We are committed to working with county governments to enhance their capacity to generate their own income and supplement transfers from the national government,” he said.

Ruto said he will engage the Cabinet with a view to reintroducing the Bill on Own Source Revenue in Parliament to give the Counties a legal framework for enhancing revenue collection at the county level.

Kirinyaga Governor Anne Waiguru, who is the newly elected chairperson of the Council of Governors, said they are optimistic devolution will work because of the support from the presidency.

“We take this opportunity to sincerely thank President William Ruto for supporting devolution. We believe together, we will deliver the devolution dream,” she said.

She said as CoG,they will continue to engage the Presidency to work on a definite roadmap for the actualization of the commitments of devolution.

“We are also going to establish linkages with the Parliament to facilitate review and development of policies and laws that are aligned to the devolved system of government,” said Waiguru.

Nandi Governor Stephen Sang, who was elected the Council of Governors Whip, said they have a better chance to implement devolution during this time.

Sang said with Wetangula as National Assembly Speaker and former Kilifi Governor Amason Kingi as the Senate Speaker, the Governors are optimistic that laws and policies that are of best interest to the counties will be enacted with ease.

In his remarks, Wetangula pledged to Governors that they can count on him and his Senate counterpart Kingi to facilitate the speedy processing of any legislation that is crucial for strengthening devolution.

He noted that their previous positions as Senator and Governor respectively had given them insights into the challenges facing devolution.

“We shall encourage the seamless flow of legislation -especially that touching on counties -between the two Houses,” he said.

Wetangula said during the recent campaigns they had an opportunity to go around the country and they witnessed many positive developments attributed to devolution.

“Devolution is truly a gift to the people of Kenya. I encourage you (governors) to ensure it becomes the foundation for the economic transformation of this country and the cornerstone for the creation of job opportunities for our young people," he said.