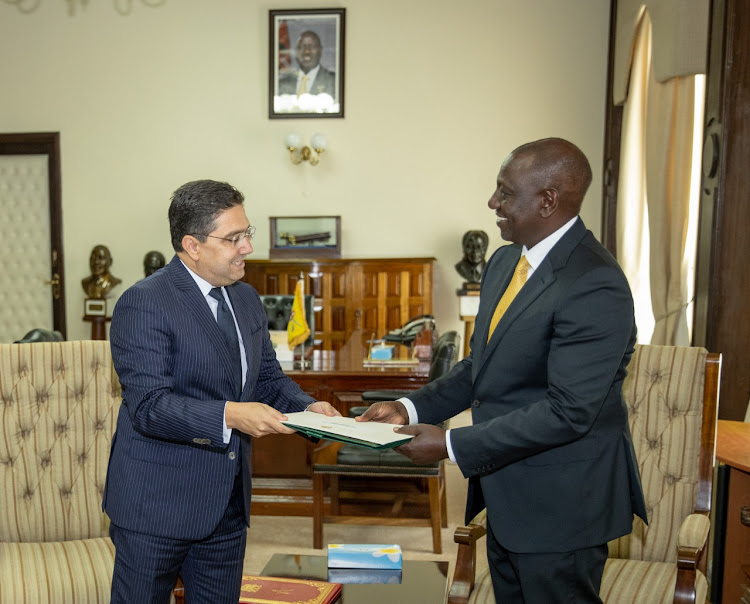 President William Ruto has suffered a backlash over his hurried decision to cut ties between Kenya and the Sahrawi Arab Democratic Republic (SADR).

Kenyans, including Ruto supporters, protested the decision, which has far-reaching implications, citing the lack of Cabinet approval.

The President, before retracting, had announced that Kenya had revoked its recognition of the SADR as an independent state in favour of the Kingdom of Morroco.

He announced the radical measure after a meeting with Moroccan foreign minister Nasser Bourita who had delivered King Mahamed VI’s goodwill message to Ruto as he ascended to the presidency.

Ruto said he would initiate steps to wind down the country’s presence in Nairobi, a directive which shocked many after President Brahim Ghali of the Sahrawi attended Ruto’s inauguration on Tuesday.

“Kenya rescinds its recognition of the SADR and initiates steps to wind down the entity’s presence in the country,” Ruto said in a tweet.

The President, however, deleted the tweet leaving one which read: “Kenya supports the United Nations framework as the exclusive mechanism to find a lasting solution of the dispute over Western Sahara.”

The decision, although expunged, elicited swift reactions from Kenyans with those in the know pointing out how it would expose Kenya.

Others argued the decision was made without consideration of the situation of Kenyans living in the SADR.

Lawyer Ahmednasir Abdullahi, a fierce Ruto defender, was among those who disagreed with the President.

“I respectfully disagree with President William Ruto. The Sahrawi People of Western Sahara have the right to self-determination. Morocco is a colonizing state,” he said.

Lawyer Donald Kipkorir said Kenya was making a mistake in supporting Morocco against the SADR.

“In 1980’s while the rest of Africa shunned apartheid in South Africa, Kenya and Malawi defied Africa. South Africa has never forgiven Kenya. Their President didn’t attend our inauguration.”

“We are making the same mistake supporting Morocco against Sahrawi Republic. Kenya is alone in AU,” Kipkorir said.

The developments have been observed to have put states like Palestine, Somaliland, Taiwan, and Somaliland on the edge, being independent states.

Morocco and Sahrawi Arab Democratic Republic are both laying claim to Western Sahara. Morocco has issues with the recognition of the SADR as a state.

Backed by Algeria, SADR wants an independent state in Western Sahara. The disputed area in the desert is rich in minerals.

The African Union recognizes SADR as one of its member states, a position Morocco is said to challenge from time to time using its diplomatic networks.

“Ideally, such recognition should have been made through Parliament. Our interests with the Kingdom of Morocco are much bigger than those of SADR,” he said.

Even so, Ruto and his predecessor Uhuru Kenyatta were divided over the Western Saraha independence question.

Whereas Uhuru supported Sahrawi’s self-independence as a solution to the question, Ruto vouched for an autonomy plan under Morocco.

His argument was that Kenya and Morroco are the leading powers in their regions and maintained that ties between the two major economies would benefit Africa as a whole.

Former Morrocan envoy to Kenya Mohktar Ghambou Sahara in an oped run in October 2020 said the Sahara has been an integral part of Morocco “since the Middle Ages”.

He argued that since time immemorial, Saharan tribes “have continuously paid allegiance to the Moroccan monarchy despite the European colonial policy of divide-and-rule.”

“Sahrawis speak and write in the same languages (Berber or Arabic) and practice the same religion (Sunni Islam) like the rest of the Moroccan population,” he said.

Sahrawi was initially under the domination of Spain but after their exit in 1975, Morocco claimed it was part of its territory.

In 1976, the Polisario Front, with Libya and Algeria’s support, won a referendum on self-determination leading to the recognition of the SADR.

A protracted stalemate ensued, with Morocco said to be blocking any attempt for a referendum with the independence option.

Recognition of the Sahrawi Republic is not only dicey for Kenya but a delicate balance for many other states with strategic interests in the region.

Decried escalating military tension between the Kingdom of Morocco and SADR.
News
11 months ago

The Western Sahara matter has been a contentious diplomatic issue between Kenya, Morocco
News
1 year ago

DP says the autonomy plan under Moroccan sovereignty is the best solution.
Siasa
1 year ago
Post a comment
WATCH: The latest videos from the Star
by MOSES ODHIAMBO Journalist and Political Writer
News
15 September 2022 - 12:34
Read The E-Paper