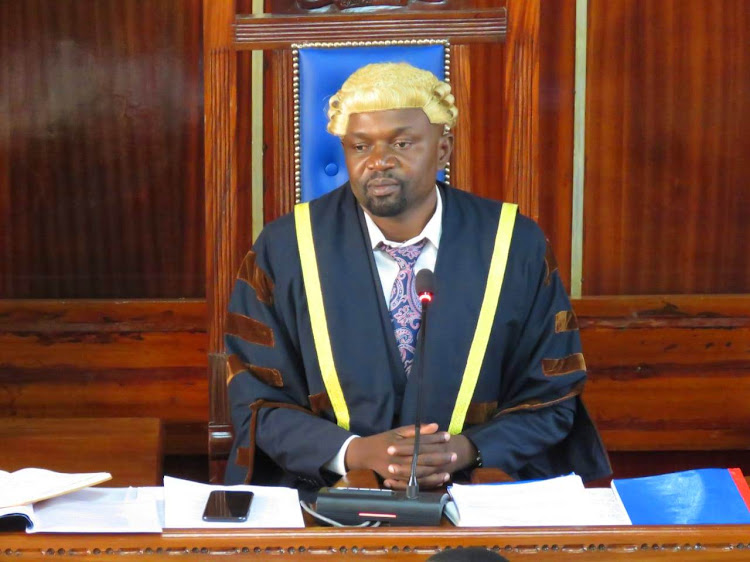 In a letter to the assembly clerk Eric Ogenga, Samuel Nundu argued that by virtue of still holding the position, Okode is a state officer and thus not qualified to contest.

“One Mr. George Okode, one of the candidates who has presented his name for consideration for the position of the speaker of the county assembly of Siaya for the third time in a row, was until today, the substantive speaker,” the letter reads.

Nundu said that Okode has not complied with the express provision of section 43(5) of the Elections Act which requires all state officers seeking elective positions to resign at least six months before the election.

“It is imperative to note that the position of the Speaker of the County Assembly is not one of the offices saved under Section 43(6) of the Elections Act,” Nundu added.

“Mr Okode does not qualify for the election of a member of the county assembly for want of resignation. He does not, therefore, qualify for election as speaker,” the letter adds in part.

Nundu wrote the letter on Thursday and the same was received in the Clerk’s and Governor James Orengo’s office the same day.

Okode did not respond to the phone calls and messages seeking his comment on the letter challenging his candidature.

The MCAs are expected to elect a speaker next week when the Assembly convenes for the first time following the August 9, General Election.

The ward reps will first be sworn-in before they elect a speaker.

When reached, Lawyer Evans Oruenjo, one of the contestants in the race, agreed with the complainant's argument.

“Speaker’s election is part of the general election and it is provided for by the Elections Act Section 21,” Oruenjo said.

“The purpose for resignation requirement is to deter candidates from using county resources and materials to the campaign.”

Nundu said that a state officer is defined under Article 260 as ‘any person, other than a state officer in the national government, a county government or public service if the remuneration or benefits of the office are payable directly from the consolidated fund'.

According to the petitioner, the Court has previously pronounced itself on the mandatory resignation of state officers seeking elective seats.

He cited a ruling by Justice Hedwig Ongudi that barred state officers from contesting the election of speakers of the County Assembly, National Assembly, and Senate speaker.

“The purpose of this letter, therefore, is to request that you disqualify George Okode from contesting for the position of speaker, Siaya county assembly on account of his failure to resign at least six months before the date of the election,” the letter states.

Standing orders state the first sitting should take place not more than 30 days after election.
Counties
5 months ago

Ex-MP Kizito among seven in race for Kakamega assembly speaker

Race will be ODM affair after party won majority of MCAs in August 9 general election
Counties
5 months ago
Post a comment
WATCH: The latest videos from the Star
by JULIUS OTIENO Journalist, Political and Parliamentary Reporter
News
15 September 2022 - 20:00
Read The E-Paper