New orders and policies have far-reaching ramifications, not all positive 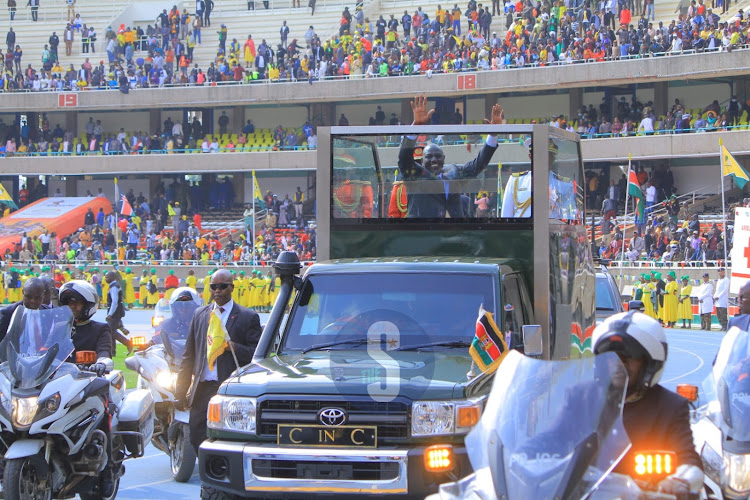 BIG CHANGES: President William Ruto takes his first lap of honour around Kasarani after being sworn in on September 13
Image: EZEKIEL AMING'A

President William Ruto has moved to implement his poll pledges but some radical plans have triggered anxiety and could be a double-edged sword for the new administration.

Ruto has vowed to undo some of his predecessor President Uhuru Kenyatta's policies. They include reverting port operations to Mombasa, eventually scrapping fuel subsidies and reviewing the Competency Based Curriculum.

Uhuru's administration forced traders to use the Standard Gauge Railway to ensure minimum guaranteed business to repay the Sh450 billion debt taken to build the SGR.

The lucrative clearance business was then moved to Nairobi and Naivasha Inland Container Depots.

While transporters have praised the move, businessmen and employees around Naivasha and Nairobi have termed the move a major blow, especially to investors who had committed millions.

Shem Kuria Mwathi said he and other traders who had shown interest in the Naivasha Special Economic Zone were still studying the implications of the directive.

“I had received approval from the county to construct a hotel in the area targeting workers from the ICD, but this is now a pipe-dream due to the presidential directive,” he said.

The move could also lead to heavy losses for Nakuru county and the taxpayer since the government has spent Sh6.5 billion in the project.

Money was also spent on a seven-kilometre link to the Mai Mahiu-Narok road, electricity connections, a business block and a perimeter wall in Naivasha.

The Naivasha Inland Container Depot is a dry port, a facility on more than 1,000 acres. It can load two million tonnes of cargo every year.

Most of the cargo handled at the port is destined for Uganda, Rwanda, South Sudan, Ethiopia, Burundi and the Democratic Republic of Congo.

Jubilee secretary general Jeremiah Kioni said it was regrettable that Ruto has started his term by rolling back Uhuru’s projects and policies.

“He should have given room for consultation with the outgoing team,” Kioni said.

“His utterances and actions sound more like a coup than a transition. There are existing government officials who should be involved in the decision-making,” he said.

Ruto has also indicated he would consider dropping the fuel subsidy, raising anxiety over the likelihood of higher transportation and production costs.

The President cited unsustainability as a reason for considering to do away with the subsidy. Long-term subsidies are not the answer, he said.

"On fuel subsidy alone, taxpayers have spent Sh144 billion, including Sh60 billion in four months. If the subsidy continues to the end of the financial year, it will cost the taxpayer Sh280 billion, equivalent to the entire national government development budget," Ruto said.

The government has since April last year been subsidising diesel, super petrol and kerosene.

Without the subsidies, the new prices to be announced could hit historic highs.

Former nominated MP Wilson Sossion, however, said the President did not say he would do away with the fuel subsidy now. He only used numbers to demonstrate the current situation and long-term problem.

“He did not say he will remove the subsidy. He only gave the numbers. What we know is that there are cartels in the distribution chain,” he said.

Sossion said subsidies have often benefited cartels and not the Kenyans who need them.

“There is a problem about the cost of fuel and that will be dealt with. I do not think the President will sit pretty when things go wrong. He was able to demonstrate to Kenyans this country will not live on subsidies forever,” the former lawmaker said.

He said Ruto will strive to engage in good governance and get rid of cartels.

“Let us not create a mountain from a small thing and confuse Kenyans on the agenda of the new government,” Sossion said.

Ruto further plans to review the Competency Based Curriculum to resolve concerns raised by stakeholders on the new education system.

The President will establish an Education Reform Task Force that will take the views of Kenyans on the curriculum. Many parents say it's confusing, requires too much of them and the crowded transition to secondary is unclear.

The education sector has been allocated Sh544.4 billion in the 2022-23 budget, taking the biggest chunk of President Uhuru Kenyatta's last budget.

Before the polls, key Ruto allies including Musalia Mudavadi and Moses Wetang'ula called for scrapping of the CBC.

He announced interventions to reduce cost of living but opposed costly subsidies.
News
2 months ago

Subsidies are unaffordable and distorting. The best way to reduce income inequality is to invest in free health and education for all Kenyans.
Opinion
2 months ago

He announced interventions to reduce cost of living but opposed costly subsidies.
News
2 months ago
Post a comment
WATCH: The latest videos from the Star
by ALLAN KISIA Political Writer
News
15 September 2022 - 05:00
Read The E-Paper