Eight injured in stampede at Kasarani ahead of Ruto inauguration

Hundreds of Kenyans attending the inauguration of Ruto forced their way into the stadium.

•Videos from the event showed hordes of people streaming into the stadium screaming hysterically.

•Some sustained injuries, with Red Cross personnel seen evacuating the casualties from the scene. Police later said they had closed the gates. 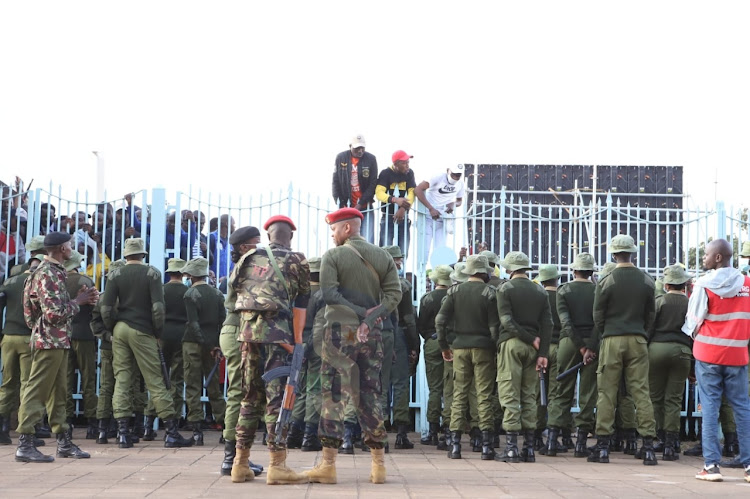 Security officers at the gate of Kasarani as citizens try to force their way into the stadium.
Image: ANDREW KASUKU

At least eight people were injured in a stampede outside the Moi International Sports Centre in Kasarani Tuesday morning.

This was after hundreds of Kenyans attending the inauguration of President-elect William Ruto forced their way into the stadium.

More police had to be brought in to control the situation after the scene turned chaotic.

A few minutes past 6 AM, police said they were unable to control the crowd, which broke the stadium’s fences and trooped in without being frisked.

“There was a breach but we have controlled the situation,” said a police officer at the scene.

Videos from the event showed hordes of people streaming into the stadium screaming hysterically.

Some sustained injuries, with Red Cross personnel seen evacuating the casualties from the scene. Police later said they had closed the gates.

"In anticipation of being part of history, Kenyans have thronged into the venue in large numbers. By 5.00 am this morning, the venue had already filled to capacity, as more people continued to troop to the venue," police spokesperson Bruno Shioso said in a statement.

"To avoid logistical challenges, this is to request the public to make alternative arrangements to view the proceedings, especially from the comfort of their homes."

Huge screens were mounted outside the stadium for those who were locked out by 7.30 am.

Up to 10,000 police officers had been mobilized for operations for the event. Some were deployed on the streets and more around the venue of the event.

At least 17 presidents, eight Prime Ministers and Deputy Presidents and seven foreign ministers will attend the inauguration of Ruto. Others include nine special envoys, seven international organisations and one former president.

All presidents from the East African Community (EAC) are expected to grace the swearing-in ceremony at Kasarani Stadium.

President Joe Biden Saturday announced the designation of a Presidential Delegation to attend the event.

The team will be led by the US trade representative Katherine Tai and will include the ambassador to Nairobi Meg Whitman, Colin Allred, United States Representative (D), Texas and Assistant Secretary of State for the Bureau of African Affairs, U.S. Department of State Mary Catherine Phee.

Assistant Administrator for the Bureau for Africa, U.S. Agency for International Development Dr Monde Muyangwa will also attend the event.

Japan will be represented by a special envoy of Prime Minister Makihara Hideki while South Korea will have Choung Byoung Gug who is the chairman of the central committee of the People Power Party and China will have Liu Yuxi, a special representative of the Chinese Government on African Affairs.

The Assumption of Office of the President Committee said some 2,500 VIPs are also expected to grace the occasion.

The function’s guard of honor is expected to be mounted by the 21st battalion of the Kenya Rifles.

Kagame is the first sitting President to visit Ruto since he was declared the 5th President-elect of Kenya.
InPictures
2 months ago

William Ruto: How Kenya's new president is influenced by religion

His wife has often held prayer meetings and Ruto credited her spiritual intervention for his political success.
News
2 months ago

Ruto said he will proceed with the Jubilee administration's big 4 agenda on creating jobs for youths.
News
2 months ago

Ruto is a self-made leader who has been working hard every step of the way.
News
2 months ago

Today marks a new era for Kenya as William Ruto is sworn in as Kenya’s fifth President
Opinion
2 months ago
Post a comment
WATCH: The latest videos from the Star
by CYRUS OMBATI Chief Crime Reporter
News
13 September 2022 - 08:36
Read The E-Paper