17 presidents among leaders who will attend Ruto’s inauguration

Others include nine special envoys, seven international organisations and one former president.

•According to a list seen by the Star, all presidents from the East African Community are expected to grace the swearing-in ceremony at Kasarani Stadium on Tuesday.

•It is not clear if President Uhuru Kenyatta will attend the event. 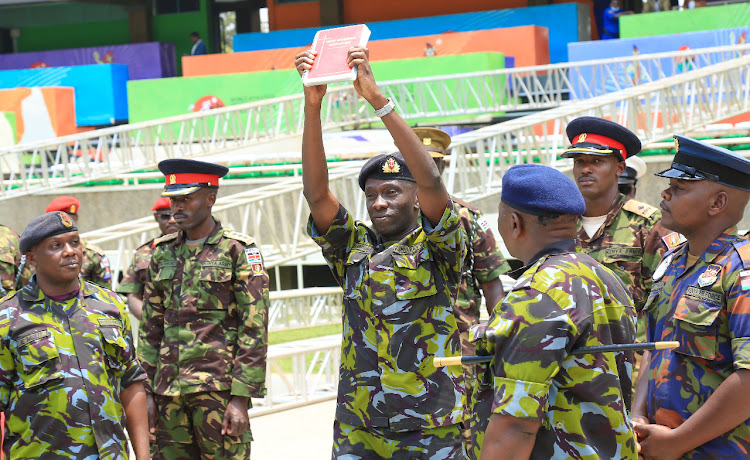 A Kenya Navy officer holds the Constitution during rehearsals at Kasarani stadium on September 6, 2022.
Image: COURTESY

Seventeen Presidents, eight Prime Ministers and Deputy Presidents and seven foreign ministers had by Sunday confirmed they will attend the inauguration of President-elect William Ruto.

Others include nine special envoys, seven international organisations and one former president.

According to a list seen by the Star, all presidents from the East African Community are expected to grace the swearing-in ceremony at Kasarani Stadium on Tuesday.

The team will be led by US Trade Representative Katherine Tai.

Japan will be represented by a special envoy of Prime Minister Makihara Hideki, South Korea will have Choung Byoung Gug who is the chairman of the central committee of the People Power Party and China will have Liu Yuxi, a special representative of the Chinese Government on African Affairs.

Plans for the event are complete with at least 20 Heads of State and government expected to attend the event.

Interior Principal Secretary Karanja Kibicho who is a member of the Assumption of Office of the President Committee, said the Ministry of Foreign Affairs is already making protocol arrangements to handle the guests.

Kibicho said 2,500 VIPs are also expected to grace the occasion, as he expressed satisfaction at the strides made to steer the ceremony.

The function’s guard of honour is expected to be mounted by the 21st battalion of the Kenya Rifles.

Kibicho urged Kenyans planning to attend should be at the Kasarani stadium by 7 am.

The gates for the 60,000-capacity stadium will be open to the public from 4 am.

The VIP podium set aside for guests and visiting Heads of State numbering 20 from across Africa is already set.

Kibicho said that carpooling arrangements have been made with Kenyan VIPs to minimise traffic and a possible parking crisis.

“A lot of our VIPs have been gracious enough to agree that we do common pooling, and therefore we shall be announcing designated areas where these VIPs will be picked,” he said.

Kibicho said uniformed and non-uniformed officers will take part in ensuring Tuesday starts and ends without any incident.

“We will have 10,000 police officers around here ensuring that there is order and that everyone is safe,” he said.

Merchandisers and food vendors will also be allowed to do business in designated areas of the stadium.

It is not clear if President Uhuru Kenyatta will attend the event.

On Saturday Chief of Defence Forces, General Robert Kibochi rehearsed how the instruments of power will be handed over to the incoming president.

Museveni is among the continental leaders who received the invites early this week.
News
2 months ago