• In the first round, former Speaker Kenneth Marende got 130 votes while Wetang'ula got 215 votes.

• To win the election round one, a candidate must get two thirds of the total number of MPS. 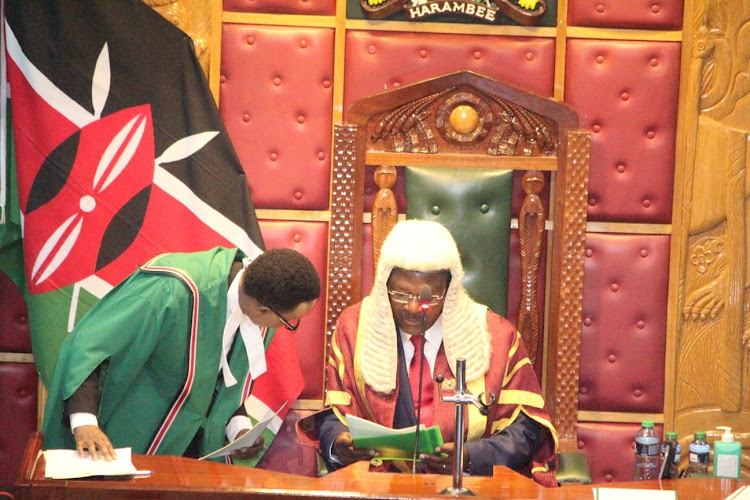 National Assembly Speaker Moses Wetang'ula goes through his speech soon after being elected as the 8th Speaker of the National Assembly on Thursday, September 8, 2022.
Image: EZEKIEL AMING'A

Ford Kenya leader Moses Wetang'ula is the new Speaker of the National Assembly.

"I wish to express my heartfelt gratitude to the honourable members here assembled, for the high honour that you have bestowed upon me by electing me the Speaker of this August House," Wetagula said in his acceptance speech.

"I accept and submit to your will and I'm ready to serve as the eighth Speaker of the National Assembly since our independence," he added.

Earlier before the announcement of Marende's concession, MPs had gone into the second round of voting to elect the Speaker after the first round of voting failed to produce an outright winner.

In the first round, Marende got 130 votes while Wetang'ula got 215 votes.

To win the election in the first round of voting, a candidate must attain two thirds of the total number of MPs.

The House has 349 members meaning for a round one win, a candidate must secure at least 233 votes.

In the second round of voting, however, the candidate who garners the simple majority is declared the new Speaker of the National Assembly.