•Supreme Court dismissed all the nine grounds that it had listed for determination in the presidential petition filed by Azimio Coalition Challenging Ruto's win. 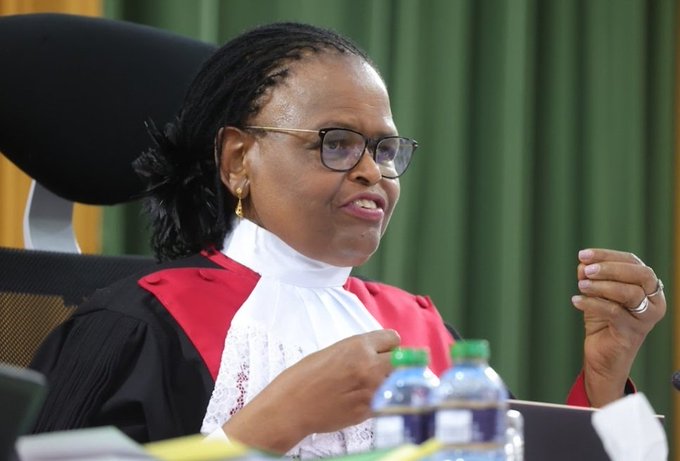 Chief Justice Martha Koome at the Supreme Court during the proceedings for the presidential election petitions on Thursday, September 1,2022.
Image: THE JUDICIARY/TWITTER

Speaking at a funeral in MCK Muiteria Church in Imenti North of her late aunt Salome Maingi Gakii, she attributes the judgement to God.

“The verdict was for the sake of independence of institutions, especially the Judiciary. It was not due to our power as a court but because we serve a living faithful God,” Koome said.

The Supreme Court dismissed all the nine grounds that it had listed for determination in the presidential petition filed by Azimio Coalition Challenging Ruto's win.

Koome, who read the judgment on behalf of her colleagues, dismissed the petitions mainly due to lack of evidence, while also citing forgery of documents.

In a statement after the Supreme Court upheld his presidential election, Ruto said his journey to the presidency is a testament to God's will.

"With men, it is impossible, but not with God: for with God all things are possible," he tweeted.

Reading the verdict of the Supreme Court on Monday, Koome said Ruto was validly elected as president and that he garnered 50 per cent plus one vote cast required for one to be announced the winner.

It's God who brought me this victory, President-elect Ruto

"There were predictions that we wouldn't get here but because of God we are here."
News
3 months ago

Ruto: With God all things are possible

Supreme Court ruled that Ruto garnered 50 plus one required  for one to be declared winner.
News
2 months ago

Ruto: Peace has prevailed in Kenya, God has given us victory