Kenya is the largest producer and exporter of avocados in Africa and ranks sixth in the world, accounting for three per cent of the world’s total.

• Some 20 tonnes of fresh Hass variety of avocados from smallholder farmers in Kenya, arrived in Shanghai, China on August 2.

• This was enabled after Kenya and China in January signed bilateral agreements that resulted in the highly demanding Chinese government allowing export of the fresh fruits into the country. 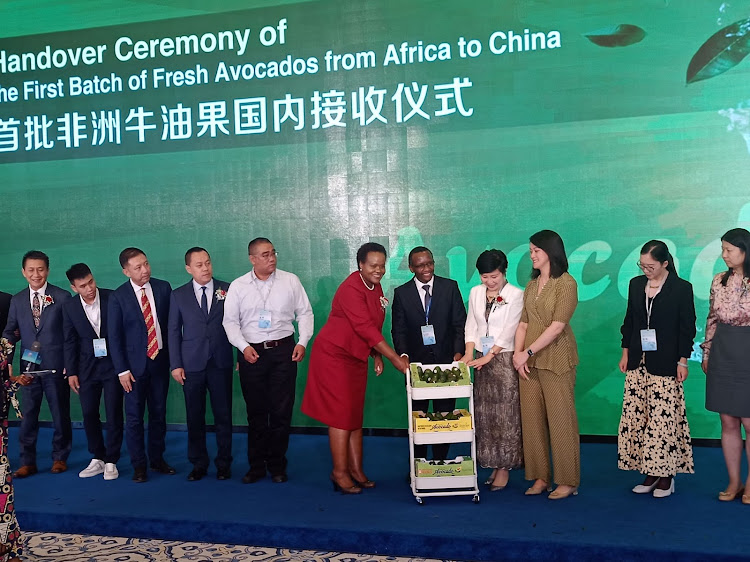 Kenyan ambassador to China Mary Muthoni [in red] and Shanghai Greechain chair Lyu Ciufeng [in white] in the handing over ceremony of the first batch of Kenyan avocados to China in Beijing, China on Tuesday.
Image: BRIAN OTIENO

Access to the Chinese market presents a huge potential for Kenyan products, Kenyan ambassador to China Mary Muthoni has said.

Speaking during the handing over of the first batch of Kenyan avocados to the Chinese market Muthoni said that Kenya has a huge avocado production capacity which has not been exploited to the fullest.

“We have such a huge avocado production capacity but we have not been able to able to export all that we produce.

“The access to the Chinese market presents huge potential for Kenya. We are looking at exporting up to 40 per cent of our avocados to China,” said Kenyan ambassador to China Mary Muthoni.

Avocados from Kenya were officially handed over to the Chinese market on Tuesday in a ceremony that served to open the doors for more African produce into the vast Chinese market.

Some 20 tonnes of fresh Hass variety of avocados from smallholder farmers in Kenya, arrived in Shanghai, China on August 2.

This was enabled after Kenya and China in January signed bilateral agreements that resulted in the highly demanding Chinese government allowing the export of fresh fruits into the country.

Kenya is the largest producer and exporter of avocados in Africa and ranks sixth in the world, accounting for three per cent of the world’s total.

Last year, the country exported 63,000 tonnes of the fruit to its traditional destinations of Europe, North America and the Gulf region.

Demand for fruit in Europe has increased drastically over the last few years.

However, the traditional destination markets have become volatile, creating bottlenecks from time to time.

Hence the search for another market in the East.

Chinese firm Shanghai Greechain facilitated the shipment of Kenyan avocados to the new Chinese market. It creates the link between the 15 Kenyan firms that have now been licensed to export avocados to the Asian country.

The milestone, after years of behind-the-scenes efforts from both the Kenyan and Chinese authorities, will see the over three million smallholder avocado farmers in benefit from the over 1.4 billion-strong Chinese market.

Muthoni said the Chinese market will have huge downstream benefits to Kenya, including addressing issues of balance of trade which is highly in favour of China.

“It will increase our foreign exchange earnings and the earnings of the smallholder farmers, who are mostly the producers of the avocados.

“This will be a great boost to the economy because it will put a lot of money in the hands of the farmers,” Muthoni, who is a month old as the ambassador in China, said.

The entry of Kenyan avocados to China is the first step, Muthoni said, towards opening up the door for many other Kenyan and African products to the Chinese market. 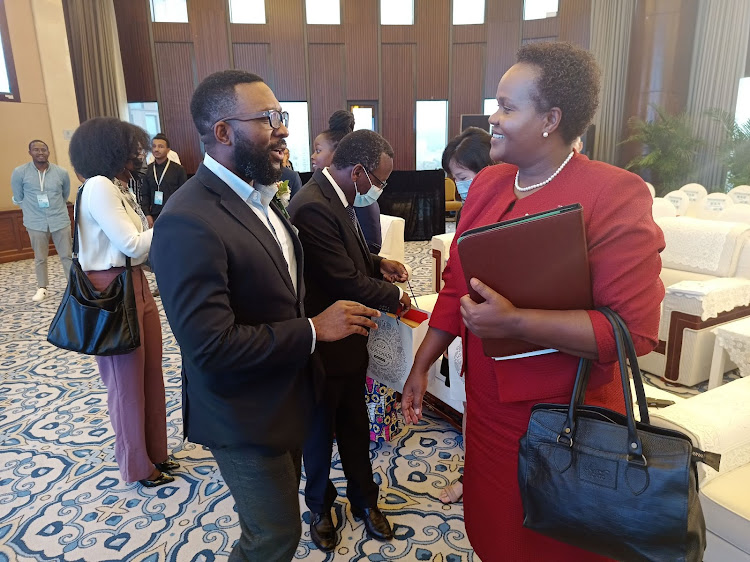 Kenyan avocado farmers have been trying to break into the Chinese market for over three years.

However, the stringent conditions that China put were a stumbling block.

“The biggest issue was the phytosanitary requirements by China. China is very particular about what products access their market. That is something we can learn from them,” said the envoy.

China does not only want to see the final product, but also how the product has been developed from the beginning, including the chemicals used, the pesticides, the manure, and fertilizer, among others and how the fruits were handled from the plucking from the farm, during processing, to packaging.

“The fact that they gave us the green light is a huge plus for our country,” Muthoni said.

Africa, represented at the ceremony by Benin, Ethiopia, Malawi and Kenya, said a win for one of them is a win for the whole continent.

Muthoni however called for cooperation as Africa so as to pool resources together and satisfy the Chinese market.

“They have said the Kenyan avocado has a good taste. They will demand more of the fruits because their population is over 1.4 billion people, even more than Africa’s,” Muthoni noted.

She said the Kenyan production may not satisfy the Chinese market and there could be a need to collate the fruit from Africa and export it to the world’s second-biggest economy.

Shanghai Greechain chair LyuCiufeng said Kenya is the first African country to export avocados to China and this will create more jobs for Kenyan youth.

However, she said Africa has a huge potential and should explore its agricultural potential.

“Africa is the largest food crop producer in the world and with the availability of huge tracts of land, it creates good investment opportunities for Chinese farms,” Ciufeng said.

Chinese officials have helped Kenyan avocado farmers learn the best agronomic practices, including how to retain quality and keep pests away.

According to Horticultural Crops Directorate director Benjamin Tito, Kenya shipped 44.26 million kilograms of a variety of fruits overseas earning Sh6.09 billion in the first six months of this year.

Kenya Plant Health Inspectorate Service managing director Theophilus Mwendwa said the export of fresh avocados had been a long and treacherous journey that required frequent and thorough inspection of the whole process of avocado production from the seedling to the end fruit.

“China is an important trading partner to Kenya. We endeavour to deepen our current relationship and continue to exchange ideas and share best practices to ensure we learn from each other and have a positive impact on our individual countries, the African region and the world at large,” Mwendwa said.

He committed to undertake the various measures agreed upon between the General Administration of Customs of China (GACC) and the Kephis.