After three governors and a two-year military leadership, the once 'Green City in the Sun' is still at its lowest.

•Nairobi is characterised by uncollected garbage, broken sewer systems, disorder as a result of untamed public service vehicles and unchecked hawkers who have overrun it.

•Most of the challenges facing the city are far from over. 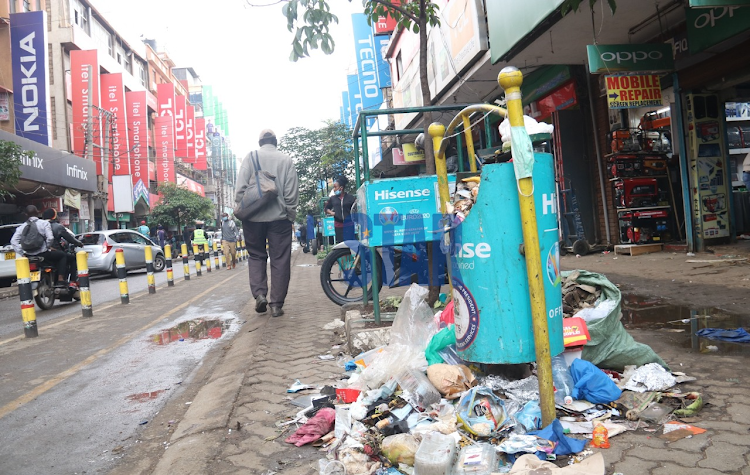 It will not be a walk in the park after Nairobi Governor-elect Johnson Sakaja takes his oath on Thursday.

After three governors and a two-year military leadership, the once 'Green City in the Sun' is still at its lowest.

Nairobi is characterised by uncollected garbage, broken sewer systems, disorder as a result of untamed public service vehicles and unchecked hawkers who have overrun it.

Most of the challenges facing the city are far from over.

The National Environment and Management Authority has for the past few months been grappling with raw sewer getting into the Nairobi River.

Few strides have been made.

Under his campaign slogan ‘Let’s Make Nairobi Work’, Sakaja said his administration will transform Nairobi into a city of order, dignity and opportunity.

In his manifesto, he pledged to construct 20 new markets across Nairobi to promote traders and decongest the main city markets, Gikomba and Wakulima, to provide an easy environment for doing business.

However, all the complete markets are yet to be commissioned even as hawkers poke holes in how they were allocated to beneficiaries.

Westlands and Karandini are among four Nairobi modern markets that were to be commissioned in 2020.

Only Westlands has since been occupied by traders.

Mwariro, New Wakulima and Karandini markets remain white elephant projects, compelling scores of hawkers to line up in major streets in most cases competing for space with pedestrians.

In some streets, garbage is becoming an eye sore.

Dotting some of the streets are litter bins.

However, some of them have big holes that don't hold the garbage.

Previous efforts to segregate litter have failed even though there are litter bins for the same.

Lack of public awareness is to blame.

Already, the national government has put in place the necessary laws seeking to transition the country into a green economy.

Near Wakulima market, food vendors are selling their groceries near stinging raw sewers.

Sakaja promised to divide Nairobi into five boroughs to decentralise the county’s leadership.

Each of the five namely East, Central, West, North and South will be headed by city managers whom he will appoint.

“The city managers will deal with the specific needs of every part of the city. Once Nairobi works, Kenya works,” he said.

The Nairobi Metropolitan Services has been spearheading efforts to decongest the city.

Among the NMS’s efforts include the construction of the Sh250 million green park bus terminal that has over time had a false start.

The reopening has stalled despite President Uhuru Kenyatta inspecting it thrice last year.

The terminal was expected to decongest the city.

However, most streets downtown are filled with PSVs.

Green Park is among six other termini that NMS  has set up for Sh350 million to be official pick-up and drop-off points once matatus are barred from the Central Business District.

But Green Park is the biggest and will host matatus plying Ngong Road and Lang’ata routes.

Despite the efforts by NMS, the governor-elect has said he will disband the body.

The service being offered by NMS is set to be reverted to City Hall if the deed of transfer is not renewed after it expires in October.

According to the Public Service Commission, the Mohammed Badi-led entity's tenure will depend on the incoming county government.

“If the incoming administration is non-desirous of continuing with the contract, then the PSC will be ready and willing to deed back all the services to the county government of Nairobi,” PSC chairman Anthony Muchiri said.

Sakaja said all county functions will be reverted to City Hall after he is sworn in.

He said his government will spearhead all the 14 county functions, including the four core functions transferred to NMS.

In 2020, former Nairobi Governor Mike Sonko surrendered essential county functions to the national government, in the form of NMS.

The move was meant to ensure the smooth running of services, ostensibly after Sonko had been barred from accessing his office at City Hall over graft charges.

Through Executive Order No. 3 of 2020, the four core functions include health services, transport, public works, utilities and ancillary services, and county planning and development.

The signing of the deed of transfer left City Hall in control of less influential departments such as ICT, e-government and education and sports.

President Kenyatta on March 17, 2021, established the NMS and appointed Badi as its director general.

The deed of transfer gave NMS the mandate to carry out the functions for 24 months, renewable from the date of establishment.

However, in March, the NMS tenure was extended to August 9 and another three months were added to allow for transition once a governor is elected.

NMS has made efforts as far as the provision of health services is concerned.

Some 20 health facilities have already been constructed and others renovated while plans are underway for the remaining eight.

Nairobi is currently having its phase one of the affordable housing project which construction is underway at Pangani.

However, it has not been completed.

NMS had already announced an open and transparent allocation of houses under the Affordable Housing Programme phase two which is yet to commence.

At least 60,000 units will be put up under the project, which is aimed at addressing the housing deficit in Nairobi.

The city population now stands at about 4.3 million people according to the 2019 Kenya Population and Housing Census by the Kenya National Bureau of Statistics.

The high population has exerted pressure on the existing physical facilities such as housing, road network, sewerage lines and water supply infrastructure.

As result, city residents have been subjected to water rationing for over seven years which has left the at the mercy of water vendors who sell the basic need at high prices.

However, the Northern Collector tunnel that was supposed to inject an extra 140 million litres of water daily into Nairobi county and its environs is yet to be completed.

Sakaja had promised to deliver clean and safe water to residents.

To address the transport system, Sakaja promised to provide efficient mobility that is affordable, reliable and orderly.

For Nairobi to fully develop, Sakaja said the city needs a proper Mass Transit System because a city with good infrastructure attracts business and has fewer problems.

“If there is a reliable transit system, there will be less need to use personal cars,” he said.

Already, the National government through the Nairobi Metropolitan Area Transport Authority is implementing Bus Rapid Transport on some routes of the city.

Namata was established by Uhuru on February 9, 2017.

Line 4, called Kifaru, is comprised of East and West.

The East runs from Mama Lucy Hospital-Donholm (Jogoo Road)-CBD and the West runs from CBD- T Mall-Bomas-Karen and Kikuyu.

IEBC gazettes 45 governors-elect and their deputies

All newly elected governors are supposed to be sworn-in, 10 days after being declared winners.
News
3 months ago

All set for Sakaja’s Thursday swearing-in