Conciliatory Ruto thanks Raila for peace

Says Uhuru will be respected for promoting growth and advocating harmony 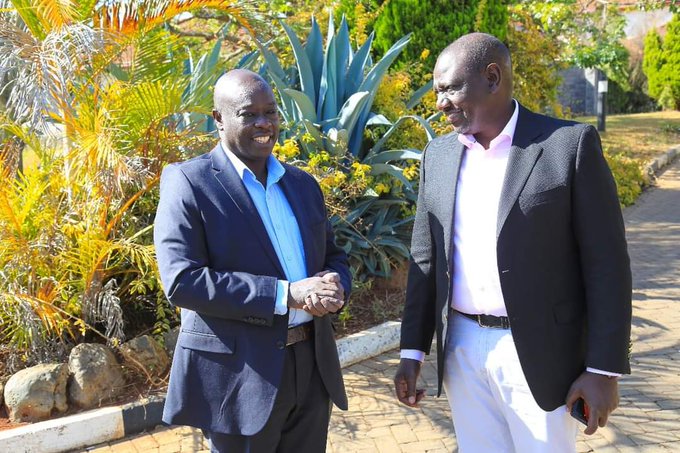 He said those who did not vote for him will be included in government and said Kenyatta's stalled projects will be completed.

He thanked Raila and the President for maintaining peace.

The cordial words contrast sharply with the bitter exchanges during the election campaigns.

Ruto thanked Uhuru for his contribution to the growth of the nation and assured him he will be respected as a leader who advocated peace.

The President-elect further thanked Azimio-One Kenya flagbearer Raila Odinga for ensuring peace prevailed during and after the elections.

“I want to thank my competitors. For the first time, they have not organised demonstrations. They have immensely contributed to the peace we have in our country,” the President-elect said.

Ruto also assured the President that he will complete stalled projects that Kenyatta initiated.

“What could not be completed will be looked into. There are projects worth Sh500 billion that have stalled but we have a plan to get them back on track. We will finish these projects as we bring in ours,” he said.

Azimio La Umoja is expected to file an election petition on Monday in the Supreme Court Court challenging Ruto's victory declared by the IEBC.

The Independent Electoral and Boundaries Commission chairman Wafula Chebukati on August 15 declared Ruto the winner but Raila disputed the results.

On Sunday, Ruto said he was extremely grateful to the people of Mt Kenya for rallying behind him in the election.

He termed the people from the region “the true heroes of the August 9 elections.

“You helped us to bury tribalism. I truly appreciate that the people of Mt Kenya have taken me as one of their sons. You stood by me through thick and thin, changed the politics of our country and buried ethnicity. I will not let you down,” the President-elect said.

“I will use your standards to take the country to another level.”

Ruto also said no part of the country will be left behind in development, all will be treated equitably and fairly.

“Those who did not vote for us will be in government. That is my commitment to all people of the Republic of Kenya,” he added.

“Kiambu is where I got the most votes of all counties in the country. That is why I started thanksgiving here. I got more votes here than in my home county of Uasin Gishu,” he said.

Gachagua said Mt Kenya region has shown the country that its people can be trusted.

“You have shown the rest of the country that we keep our word, we are not conmen and fraudsters. Mt Kenya people are not liars. Thank you so much for that honour,” he said.

He asked the people from the region who did not vote for Kenya Kwanza to join Ruto in nation building.

“The Mt Kenya Foundation and all those who were opposed to Ruto, I am inviting them to join us in national building,” he said.

Kuria said leaders from the region who supported Ruto went through difficulties but have emerged strong.

“We have gone through so much but we are now walking with our heads held up high. We are people who can be trusted. We can even get loans from banks without security,” he said.

Wamatangi said those going to court to challenge Ruto’s victory were exercising their democratic rights.

“Go there and you will find him there waiting for you. We will also be there,” he said.

He assured Ruto that Mt Kenya will fully rally behind him in the court.

I'll give Uhuru respect he deserves as outgoing President - Ruto

Uhuru backed Raila in the recently concluded general election, but he lost to Ruto.
News
3 months ago

Karua: We shall accept the Supreme Court verdict

Raila claimed that the declaration of Ruto as the president-elect was null and void.
News
3 months ago

Wetang’ula to Raila: Shake hands with Ruto for peace

Wetangula said the purpose of the handshake will not be to share government.
News
3 months ago