The four IEBC commissioners who rejected Monday's presidential results have given reasons behind their decision. https://bit.ly/3w3QxNR 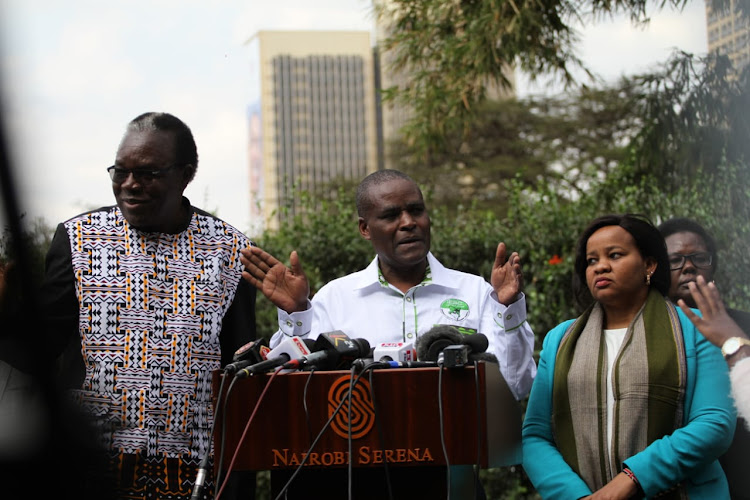 Disgruntled IEBC  bosses have once again ‘distanced’ themselves from the election results that declared William Ruto as president-elect on Monday.

Addressing a press conference at Serena Hotel in Nairobi yesterday,  the four commissioners led by vice chairperson Juliana Cherera insisted the results declared Monday were Chebukati's and not the commission's.

Giving signals they would testify against Chebukati at the Supreme Court, the four gave reasons the Ruto win cannot stand the constitutional threshold.

For instance, Cherera disclosed their attempt to question the presidential figures, which she claimed exceeded the 100 percentage, was dismissed by Chebukati, who was hell-bent on announcing the results.

Aggregated, the total percentages add up to 100.01 per cent instead of 100 per cent.

“When we demanded that we verify our record,  Chebukati declined, overruled us and insisted on declaring and announcing the said figures,” Cherera said.

Cherera alongside commissioners Justus Nyang’aya, Francis Wanderi and Irene Masit walked out of Bomas before the declaration of results on Monday.

Chebukati was only left with a minority commissioners, Prof Abdi Guliye and Boya Molu, who were also absent during the final declaration. Chebukati said they had been injured in the melee, and were undergoing treatment.

The four insisted that Chebuati blocked them from verifying the final tallies and was instead bulldozing them into rubberstamping his final figures.

Cherera said it is the commission’s mandate to process results before they are declared and announced by the chairperson.

The mandate, she noted, is buttressed by the authority of the Maina Kiai case (Petition No. 016 of 2016 as upheld by the Court of Appeal in Civil Appeal No.105 of 2017 and affirmed by the Supreme Court of Kenya that requires approval of the commissioners before the chairperson declares the results.

“We state categorically that the results of the presidential election held on August 9, 2022 declared and announced by Wafula Chebukati on August 15, 2022, belong to  Chebukati and do not represent a declaration and announcement by the Independent Electoral and Boundaries Commission,” she said.

“The commission has to process the results before they are declared and announced by the chairperson.”

The IEBC quadruplet – in a joint statement – further poked holes into Chebukati’s declaration claiming at the time he was declaring the winner; results from over 20 constituencies had not been announced.

According to the results declared by Chebukati, Ruto had beaten Raila with 233,211 votes margin.

“In this regard, the results announced by Chebukati lack a critical ingredient namely the total number of valid votes cast to support the percentages scored by the four candidates,” Cherera said.

“In the absence of a credible and verifiable explanation, we concluded that the process that went into the generation of Form 34C, which Chebukati used to declare results of the presidential election, was opaque and incapable of earning our ownership and confidence.”

IEBC system was hacked, Azimio claims ahead of presidential results

"We have intelligence reports that their system was penetrated and hacked." Kanchory said.
News
1 month ago