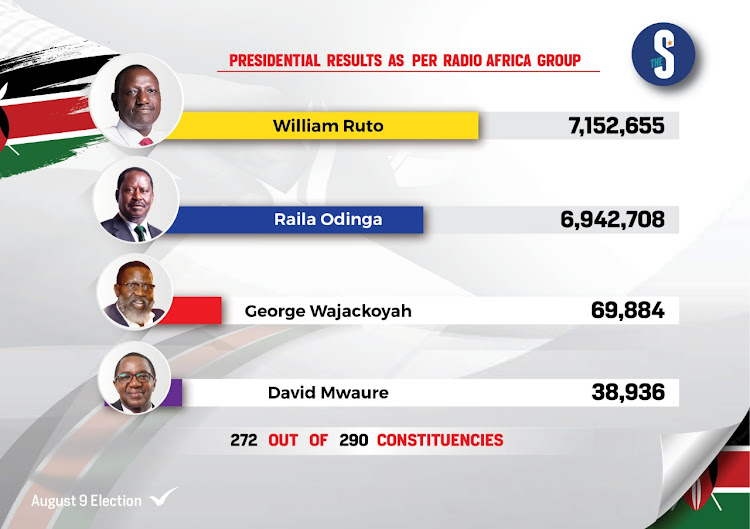 The results as per Radio Africa Group.
Image: THE STAR

The long delay by the IEBC in announcing the final verified results of the August 9 presidential election is starting to lead to confusion. There have been conflicting reports about the state of the vote count.

The IEBC latest verified Form 34 Bs show William Ruto leading Raila Odinga. Reuters reports that Ruto is leading Raila with 52 percent of the vote in its nearly complete tally of Form 34As.

A Radio Africa tally of all Form 34Bs (provisional and yet to be fully verified by the IEBC) shows that Ruto received 50.36 percent of the vote compared to 48.88 percent for Raila.

The vote tally is available at https://elections.thestar.ke  and consolidates the Form 34Bs aggregated to the 291 constituencies and to the provisional national count. Radio Africa is updating the final tally of the remaining 49 polling stations with 34, 815 outstanding votes. However the IEBC has not yet verified and officially released all the Form 34Bs so the figures should be treated with caution.

On Saturday Royal Media Services, the owner of Citizen TV, and Standard Group in a press release called the August 9 election in favour of the Azimio presidential candidate Raila Odinga.   A press statement released on Saturday stated that Raila Amolo Odinga received 51.13% of the vote and William Ruto 48.22%. The press release was signed by S. K Macharia for Royal Media Services and Gideon Moi for Standard Group.

The IEBC has made all Form 34As and Form 34Bs available at its portal.

The international news agency Reuters is also reporting in its stories that Ruto is leading the vote, according to the collated Form 34Bs.

“Reuters news agency and other media outlets have been tallying results forms from 291 constituencies posted on the election commission website. These have not yet been verified, and this tally is running well ahead of the official one. As of 2100 GMT (Saturday), Reuters had tallied 241 forms, which showed Ruto in the lead with nearly 52.3% of the vote, compared to 47% for Odinga. Two other candidates had less than 1% between them. Thirty other forms could not be included in the count because they were unreadable or were missing information such as signatures, constituency names, or totals”, Reuters is declaring..

In polls ahead just of the election, TIFA, Infotrak and IPSOS called the elections for Raila Odinga with an 8 percent, 7 percent and 6 percent lead respectively while the Radio Africa poll called it for William Ruto with a 1 percent lead.

IEBC has declared that Senator Johnson Sakaja has won the Nairobi Governor seat after garnering 699,392 votes (56 percent) defeating his main rival Polycarp Igathe (41 percent of Jubilee who got 573,518 votes. A Radio Africa Nairobi gubernatorial poll July 2022 predicted Sakaja would win by 57% of the vote.

A section of them alleged that some IEBC officials were colluding with their opponents.
News
1 month ago

You are not forensic auditors, Chebukati tells off party agents at Bomas

If supporters of either side feel cheated, it could spark violence
Opinion
1 month ago

He noted that some RO's had been at the National Tallying centre for three days, and had not been cleared.
News
1 month ago
Post a comment
WATCH: The latest videos from the Star
by STAR REPORTER The Star
News
15 August 2022 - 07:20
Read The E-Paper