Raila won in three out of six constituencies results verified and announced by IEBC.

• The DP on the other hand beat Odinga in both  Webuye East Baringo Central and Ol Jororok Constituencies. 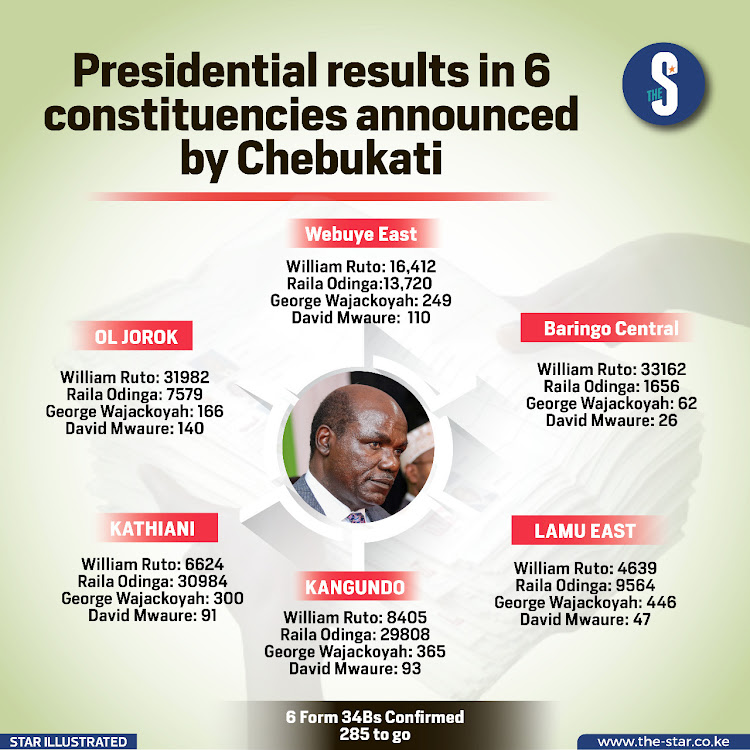 The DP on the other hand beat Odinga in both  Webuye East Baringo Central and Ol Jororok Constituencies.

The UDA presidential candidate now leads the race to succeed retiring President Uhuru Kenyatta with 104,517 with Odinga coming second with 99,672 votes from the six constituencies so far tallied.

Ruto is ahead in Baringo Central with 33,162 votes against Raila’s 1,656 votes. Agano’s David Mwaure and George Wajackoyah of Roots Party got 26 and 62 votes respectively.

The DP also leads Odinga in Ol Jororok (Nyandarua County) with 31,982 votes with Raila coming a distant second getting 7,579 votes.

In Lamu East Constituency, Raila won with 9564 beating Ruto who got 4639 votes.

While releasing the results, IEBC chairman Wafula Chebukati warned political parties conducting parallel tallying to desist from any attempts to declare themselves winners.

“We allowed candidates to do their own tallying and their tallying is for their own consumption. The candidates should not attempt to declare themselves,” Chebukati said.