Mt Kenya deliberately chose to be in opposition, Kioni says after defeat

Kioni claimed there was vote rigging in favour of their rival UDA in the Mt Kenya constituencies. 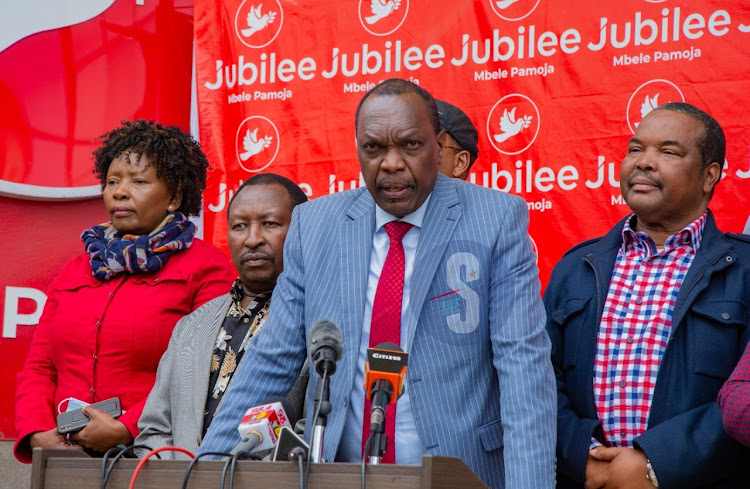 Jubilee Party Secretary General Jeremiah Kioni has now said that the Mt Kenya region will pay the price for failing to overwhelmingly back the Azimio La Umoja coalition.

Speaking at the Jubilee headquarters in Nairobi, he admitted that the Kenya Kwanza presidential candidate William Ruto had defeated them in their own region, a place which has been in power since independence.

“For the first time since 1969, we have volunteered ourselves into the opposition. It is embarrassing," Kioni added.

The SG also claimed that the region was the worst affected by the ‘ yellow wave’ noting that Ruto got the majority of votes and seats from the region.

On Thursday, the Jubilee Party dismissed the notion that there was an alleged UDA wave in the Mt Kenya region that saw their opponents lose.

"For the record, let all and sundry know there was no "Yellow Wave" in the Mt Kenya region including other regions like Bungoma, Taita Taveta and Kisii. These claims are far from the truth," Kioni added.

He also claimed there was vote rigging in favour of their rival UDA in the Mt Kenya constituencies.

However, Kioni said together with other Jubilee leaders who lost that they don’t regret it because they were standing for what they believed in.

Mt Kenya took the heaviest beating from UDA. It is not something that was occasioned on these leaders without knowing. It is a decision they made and took, there was a cost to it, and they have paid the cost ” he added.

After serving the people of Ndaragwa for 10 years, Kioni lost in the just concluded elections to UDA’s George Gachagua.

Despite the yellow wave, Kioni said that the 20 per cent plus votes garnered by Azimio one coalition presidential candidate Raila Odinga in Mt Kenya due to his effort and other Jubilee leaders who supported his presidency.

The SG further said that without them supporting Odinga, Ruto would have already been declared President by now, arguing that their efforts played a critical role in countering his influence in the Mt Kenya region.

“Was it not for the messaging and the roadwork that was done by my colleagues, it is possible that William Ruto would have been declared President more than three days ago. We are proud of the role we played, and we are happy with that role,” Kioni added.

The SG also alleged that areas like Bungoma, Taita Taveta and Kisii counties were also affected.
News
3 months ago
Post a comment
WATCH: The latest videos from the Star
by MAUREEN KINYANJUI News Reporter
News
12 August 2022 - 17:05
Read The E-Paper