He claims he got more than 225,000 votes and led in six out of eight constituencies

• Before announcing the results, Apopa said they followed all due procedures and were satisfied with the results. 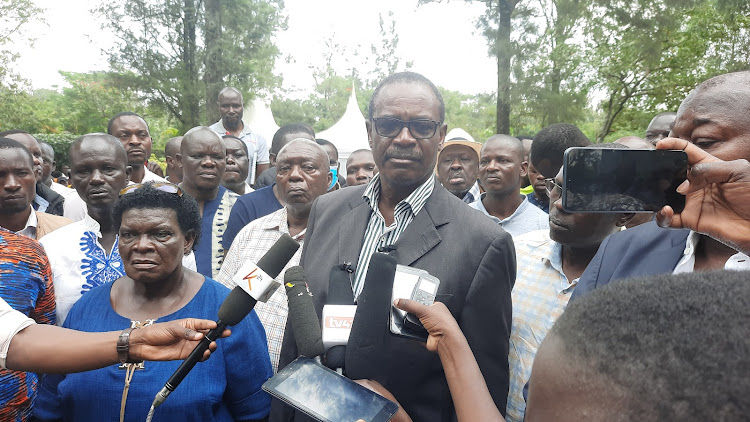 Kidero said he was not satisfied with the results, which showed his opponent and ODM candidate Gladys Wanga won the race.

Before announcing the results, Apopa said they followed all due procedures and were satisfied that the results were a true reflection of the will of the Homa Bay people.

“We verified and tallied the results as brought by returning officers from the constituencies and satisfied that they were accurate,” Apopa said.

But speaking during a meeting with his supporters at his Asumbi home in Rangwe constituency, Kidero said he was not satisfied with the results. He claimed the process was marred by discrepancies.

Kidero argued his votes from some polling stations were not tallied as Form 37As were altered in certain areas such as Mfangano, Rusinga and other wards across the county.

Kidero claimed he got more than 225,000 votes and led in six out of eight constituencies.

“We’ve evidence how some IEBC officials colluded with agents of my opponent to doctor and messed up with Form 37As. For the avoidance of doubt, we’re going to challenge the outcome in court,” he said.

Kidero, who contested the governor's seat as an independent candidate, said violence was also meted out to his supporters during campaigns and on Election Day.

The former governor said he reported to police many cases of violence  meted out to his supporters, but no action was taken.

Kidero also claimed the election was marred by voter bribery, intimidation of agents and chaos. He alleged that several of his supporters were assaulted.

The former Nairobi governor told journalists this was intended to cause voter apathy in areas where he has a lot of support.

“Police were compromised because they didn’t take necessary action whenever such cases of violence were reported,” he said.

After Wanga was announced the winner, she extended an olive branch to Kidero, asking him to join hands with her to develop Homa Bay.

She said she will not discriminate against anyone whether they voted for her or not.

But Kidero maintained he will not negotiate with Wanga, saying he cannot accept a "fraudulent election exercise".

Kidero argued that Homa Bay people were being deprived of freedom to choose their leader.

“Let Homa Bay people remain peaceful because they had elected me as their governor.  We’re seeking legal redress on the matter to the latter,” he said.

Wanga and Kidero are the two front runners for the seat.
News
1 month ago