Six counties yet to submit forms 34A

The counties are Garissa, Kakamega, Mandera, Nandi, Narok and Wajir

•Wajir has only submitted  97.05 per cent is expecting results from three constituencies. 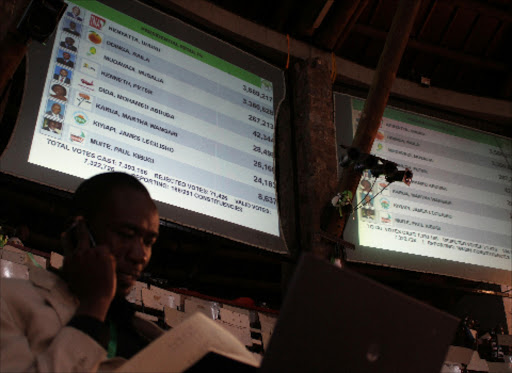 ELECTIONS: An agent follows the manual tallying process of the presidential vote at the national tallying centre in Bomas, Nairobi, on March 4, 2013.
Image: FILE

The Star can now reveal that six counties are yet to submit their forms 34A from their polling stations to the constituency tallying centres.

The counties are Garissa, Kakamega, Mandera, Nandi, Narok and Wajir.

There have been several reported challenges and delays experienced in various polling stations, which explains why some are yet to submit half of the results. 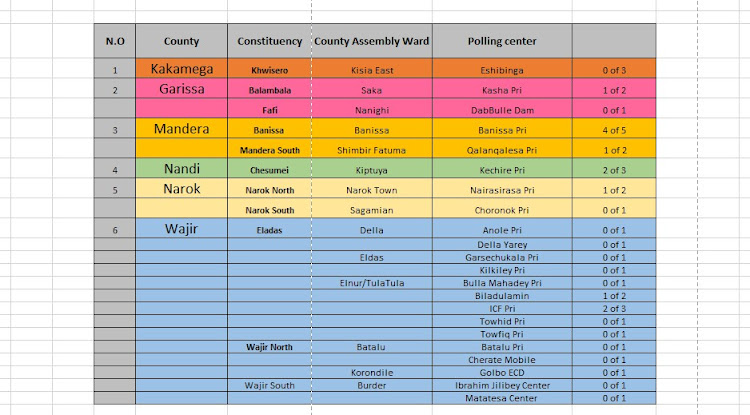 Nandi county had submitted 99.89 per cent of the forms.  Of a total of 6 constituencies, the Chesumei constituency is yet to submit.

Kakamega county had submitted 99.82 per cent of the forms. Khwisero constituency is yet to submit from a total of 12 constituencies.

Garissa and Mandera counties have submitted 99.46 per cent of the forms 34 A.

Narok county had submitted 99.77 per cent and is expecting results from Narok North and Narok South Constituencies, one polling station each.

Wajir county is lagging behind and has only submitted 97.05 per cent of the forms. Three counties, Wajir North, Wajir South and Eldas, are yet to submit the forms.

A total of 22 polling stations still have to submit forms 34 A.

In past elections, the market was torched after announcement of results
Counties
1 month ago

Voting in Eldas pushed to Wednesday after commissioner meets stakeholders

Voting exercise has been peaceful — police

Police spokesperson says the country was relatively calm, apart from a few incidents.
Elections 2022
1 month ago