Mkomani ward has a total of 24, 154 registered voters.

•At Westlands Primary, queues were witnessed from the school gate to the Karuna Close corner as most voters told stories.

•At Lower Kabete Primary, voters were still kept outside as the school gate was yet to be open as early as 5am. 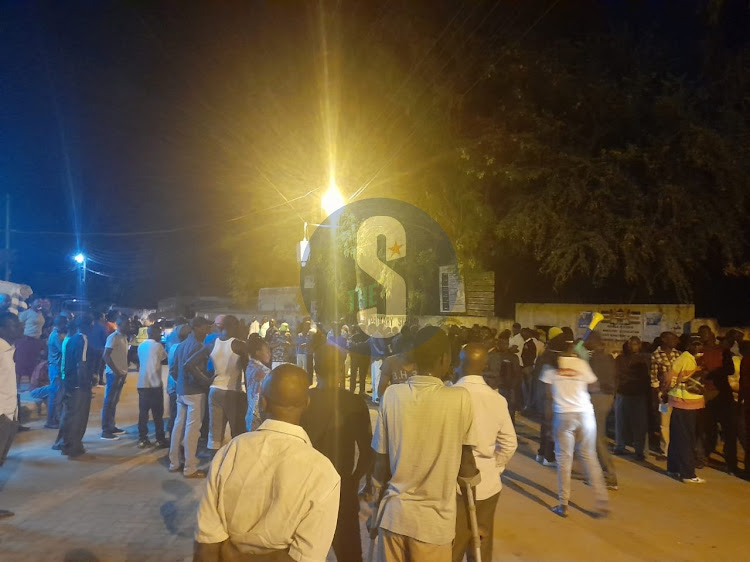 Locals already at Maweni polling centre in Nyali constituency. The polling centre at the heart of Nyali has over 5,000 registered voters./CHARLES MGHENYI

Thousands of Kenyans on Tuesday thronged Polling stations as they sought to cast their vote in the much awaited elections.

A spot check by the Star on Tuesday indicated long queues across many polling stations as cars were packed across walking lanes.

At Westlands Primary, queues were witnessed from the school gate to the Karuna Close corner as most voters told stories.

With many braving the weather, Kenyans wrapped themselves in warm clothes.

At Visa Oshwal Primary School, voting material arrived at 6:10 am in Westlands Constituency.

Voters at this polling station started streaming in as early as 4:30am.

At Lower Kabete Primary in Kiambu, voters were still kept outside as the school gate was yet to be open as early as 5am.

In Mombasa, hundreds of voters have already started streaming in at Maweni Primary School in Nyali to take part in today's voting exercise.

The polling centre, within the vast Maweni, Kisumu Ndogo, and Kidogo Basi slum areas, is within Mkomani Ward of Nyali.

The centre is one of the biggest in Nyali with over 5,000 registered voters.

The largest polling centre within Nyali is Ziwa La Ngombe Primary School with over 9,000 voters.

ODM leader Raila Odinga's supporters started blowing whistles and trumpets as early as 3am to rally supporters to wake up and vote.

The supporters are part of the Firimbi Movement that was launched by the Azimio la Umoja Coalition party presidential candidate Raila Odinga in July 28.

Mkomani ward has a total of 24, 154 registered voters

The total number of registered voters in Nyali is 124,253, which makes it the second most populous after Kisauni which has 135,276.

Post a comment
WATCH: The latest videos from the Star
by NANCY AGUTU AND CHARLES MGHENYI
News
09 August 2022 - 06:03
Read The E-Paper