I can sue IEBC for postponing Mombasa boss poll — Awiti

• Awiti says IEBC, supplier or others should be held responsible for laxity. New date for governor poll to be announced in gazette.

• He said he was consulting lawyers about his next move. 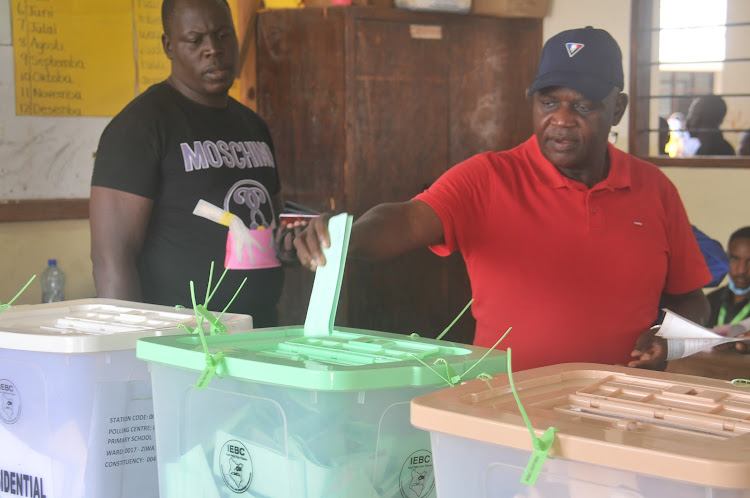 Former Nyali MP Hezron Awiti has threatened to sue the Independent Electoral and Boundaries Commission for postponing the governor election in Mombasa.

Awiti, who is vying for the Mombasa boss's seat for a second time, blamed laxity by the IEBC for the ballot papers errors. He said the electoral agency had assured Kenyans they were ready to conduct elections.

“I am consulting my lawyers on the next step of action. We have spent money campaigning and our people were ready to vote,” Awiti said.

A delegation of IEBC officials, political parties and others went to Greece to witness the printing and packaging of presidential and other ballots, though they could not possibly check everything.

He said that he was at the Mvita constituency tallying centre on Monday to confirm the reports when he had the news that the Mombasa governor ballot papers were missing.

On Monday evening, IEBC chairman Wafula Chebukati announced the governor elections in Mombasa and Kakamega counties had been suspended because of errors on the ballot papers.

Chebukati said that the new poll dates would be announced through a gazette notice.

Awiti called on the IEBC and security agencies to take action against individuals who, he alleged, tried to rig the election.

“It is sad these things can happen at this time. I am aware some parts of Mvita were yet to begin voting as of 9am. I am going there to monitor the situation,” he said.

“These are clear signs some people were planning to rig, we are lucky the governor race has been postponed,” he said.

He further alleged that some IEBC officials were colluding with a section of aspirants to manipulate the elections; he called for their reshuffling.

“We know most of the officers recruited for this election were from one community. They ought to be reshuffled. We will raise this when the commission announces the new dates," he said.

Awiti urged his supporters to remain calm, adding he was ready to go to the ballot as soon as the IEBC announces the new election date.

“I urge Kenyans to maintain peace and calm, the country belongs to all of us so there is no need to fight," he said.

"If there is a problem, let us follow the rule of law, that is how we build a strong society,” he said.

Mvita Returning Officer acknowledged the confusion and said they were working on the matter.
Counties
4 months ago

Others affected are Pokot South and Kacheliba constituencies.
News
4 months ago