Do not share pictures of marked ballot papers, IEBC warns

Constitution of Kenya stipulates that election should be conducted through secret ballot. 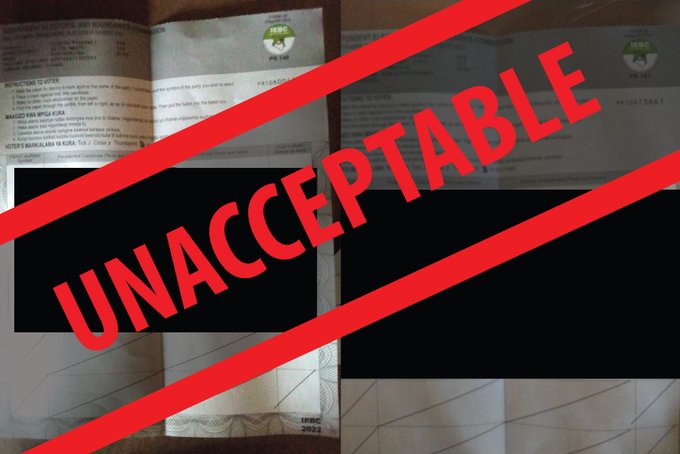 A picture of a marked ballot paper
Image: IEBC

You are breaking the law by taking photos of marked ballot papers and sharing them on social media, the IEBC has warned.

The Independent Electorate and Boundary Commission on Tuesday said sharing marked ballots is punishable by law.

"Violating secrecy of the ballot is punishable by law," reads part of a notice issued by the agency.

The warning comes after several voters took to social media displaying their marked papers with their candidate of choice.

The Constitution of Kenya stipulates that the election should be conducted through secret ballot.

“The poll shall be taken by secret ballot on the day specified in Article 101 (1) at the time, in the places, and in the manner prescribed under an Act of Parliament,” reads Article 138 on the procedure for electing the President.

In a statement released on Thursday, DPP Noordin Haji said Kenyans should avoid voting more than once.

"Voting more than once is a serious offence. Giving or receiving a bribe and use of force, chaos and sexual violence or threats to influence the outcome of an election are offences," DPP said.

He added that applying to vote using the name of another person, whether dead or alive, at a polling station is an election offence.

He said that Kenyans should avoid impersonating an election official during the elections period.

"Use of public resources to campaign during elections and the use of force to compel a person to support a particular candidate or political party is wrong," the DPP said.

Haji said the offences can be committed by the public, public officers, police, aspirants for political office, organisations, agents, election officials, among others.

IEBC said they will announce their replacement on Monday ahead of Tuesday's vote.
News
4 months ago

Kinango most populated in Kwale with 98,123 voters - IEBC official

Half of polling stations had not received the IEBC materials by 8am.
Counties
3 months ago

Petitioners argue IEBC hurriedly shut public portal in 2017 before results could be verified
News
4 months ago
Post a comment
WATCH: The latest videos from the Star
by PURITY GITAU
News
09 August 2022 - 16:43
Read The E-Paper