He said the hate leaflets were dropped at night.

•He said he has no connection to the said hate-spreading leaflets which warned voters against voting for him.

•Monyenye told the police to leave no stone unturned in their investigations. 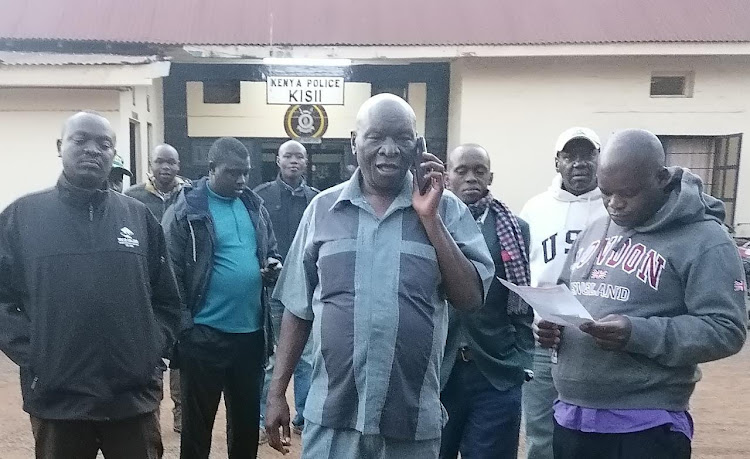 Monyenye Yoge (on phone) talking to journalists outside Kisii Central Police station where he recorded a statement on Monday, August 8, 2022.
Image: MAGATI OBEBO

ODM candidate for Kisii Central Monyenye Yoge has asked security agents in the region to probe leaflets bearing hate messages that are in circulation within the county.

The leaflets were found littered across the ward Monday morning, a day before the poll.

Monyenye said the inciter dropped them at night.

He said he has no connection to the said hate-spreading leaflets which warned voters against voting for him.

He recorded a statement with police at Kisii Central Police Station on Monday dawn.

"I have come here not only to exonerate myself but also want security agencies to investigate whoever is behind this act," said Monyenye.

The leaflets insinuated that the ODM candidate had held a private meeting with some people in town with intention of plotting to remove non-locals doing business in Kisii town.

It further spoke of plans by him to use his position when he wins to push people of a specific religion out of town over noise pollution.

The leaflet ends by asking the residents to vote wisely.

Monyenye told the police to leave no stone unturned in their investigations.

"I am a law-abiding citizen, I want justice. Meanwhile, I ask my supporters to keep calm as police begin work," he told journalists.

He said emergence of hate leaflets in Rift Valley days to elections should not be underrated.
News
3 months ago

Preach peace everyone, Poghisio tells Kenyans ahead of polls

His remarks followed emergence of hate leaflets in parts of Rift Valley.
News
3 months ago